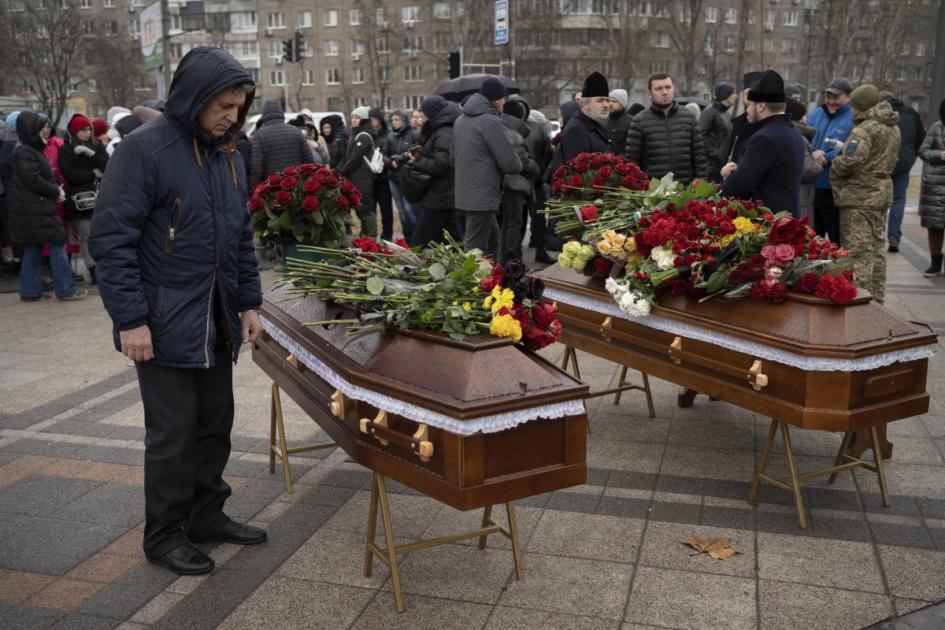 GIVEN the UK has 227 Challenger tanks, it could afford to give Ukraine 100 rather than just 14 (“No 10 has faith in Ukraine tanks plan”, The Herald, January 17), but make supplies of ammunition and spare parts conditional on no attack on Crimea and leaving Russia token small parts of the Donbas, then offering Vladmir Putin a deal that he could keep those areas if he agrees to withdraw all his forces from the rest of Ukraine, formally recognise the rest as Ukrainian territory, and recognise the legitimacy of the Ukrainian government.

Other Nato governments could do similarly. Putin must lose in Ukraine so he doesn’t become over-confident and attack other countries, including Nato members, risking escalation to nuclear war. But he must not think he’s about to suffer a total defeat that might lose him power in Russia. He would fear the same exile, jail or death he’s imposed on his political opponents. And that might make him risk using tactical nuclear weapons to try to force a deal.

Nor is there any guarantee that if Putin lost power without using nuclear weapons, his replacement would be any less extreme or less likely to use them. Yevgeny Prigozhin, the founder of the Wagner mercenary group is one potential successor. Another is Ramzan Kadyrov, President of the Russian republic of Chechnya, who has already suggested using tactical nuclear weapons.

Serhii Plokhy’s book The Gates of Europe says “In…1991…Yeltsin instructed his press secretary [that] if Ukraine and other republics declared independence, Russia would have the right to open the question of its borders with those republics…indicated the Crimea and eastern parts of Ukraine, including the Donbas coal region, as possible areas of contention. The threat was partition if Ukraine insisted on independence.”

Yeltsin, far more liberal than Putin, was also furious at Nato expansion Eastward. And Yeltsin’s economic “reforms” left many Russians being left with nothing and the oligarchs with fortunes. Putin has since been able to pose as saving Russians from Yeltsin’s chaos.

So we should be containing Russian expansionism without risking nuclear war, not gambling on Putin going quietly, or his replacement reversing course.
Duncan McFarlane, Carluke

• UNLIKE Michael Sheridan (Letters, January 19) I suspect that Vladimir Putin will not be concerned about whether or not the United Kingdom has a Trident base on the Clyde. As Mr Sheridan observes, there are two main powers with nuclear weapons, the United States of America and Russia. Putin is more concerned about the response from the US rather than the UK with its comparatively small nuclear arsenal.

There is however one scenario with regard to dismantling the base at Faslane which would attract Putin’s attention. If the surplus submarines were to be sold or gifted to Ukraine and redeployed in the Black Sea then the Russians would not welcome the departure of the United Kingdom from the nuclear arms race.
Sandy Gemmill, Edinburgh

Windmills will not be enough

VICKY Allan (“Giant turbines or climate hell? I know which one I’d rather”, The Herald, January 17) writes about our future as a wind-powered nation, but misses some vital points.

She refers to windmills as wind turbines. A turbine generates continuous electricity using a controllable fuel source, but a windmill collects energy from an uncontrollable and variable source – wind – and converts it to electricity, so the amount of electricity obviously varies directly with the amount of wind, whereas two turbines will produce twice as much electricity as one turbine, and so on. So increasing windmill numbers does little to increase electricity output, and in a calm there would be no electricity no matter how many windmills there were.

If windmills are meant to save CO2 they fail, as the CO2 generated in their production and installation is massive and may not be retrieved during their short lifetime.

In terms of electricity, windmills produce about 25 per cent of their rated output on average, and that output is variable so is useless as the base load which the national grid requires for operation. As top-up they would be acceptable in a small way.

Regarding the safety aspect of nuclear power, Ms Allan writes as though nuclear power stations explode on a regular basis. They don’t. In fact there are 422 nuclear plants in the world keeping industry supplied and domestic heat and light on. 103 more are under construction or scheduled. Modern nuclear power is safe and clean and if we are to keep pace with the rest of the world, we need reliable nuclear and fossil generation as the windmills simply won’t do it for us.
Malcolm Parkin, Kinross

Are the ferries under control?

WHEN one reads of the latest information with regard to the delivery, or otherwise, of the ferries Glen Sannox and Hull 802 (“Fresh fears raised over whether ferry fiasco vessels will ever sail”, The Herald, January 18), one is reminded of the wording associated with the Glasgow coat of arms:

Her is the fish that never swam.

To that it looks like one could add: Here are the ferries that never sailed.

It now looks that the First Minister is unlikely to be asked back to officially launch either of these ferries, following the so-called launch in 2017 by her of the Glen Sannox when fake windows were painted on the bridge.

However, we have already been advised that the First Minister accepts full responsibility for the failures, whatever that is meant to mean in practice, and we learn that a “series of regular calls” has been put in place between the Deputy First Minister John Swinney and Ferguson Marine. The Scottish Government has obviously got everything in hand then – aye, right.
Ian W Thomson, Lenzie

A SMALL point re Ian Gray’s letter (January 17) about yours faithfully, sincerely and the like. The “y” should not be a capital but a small letter.

It is short for “I am yours faithfully/sincerely…”
Alistair Johnston, Hamilton

Letters should not exceed 500 words. We reserve the right to edit submissions.