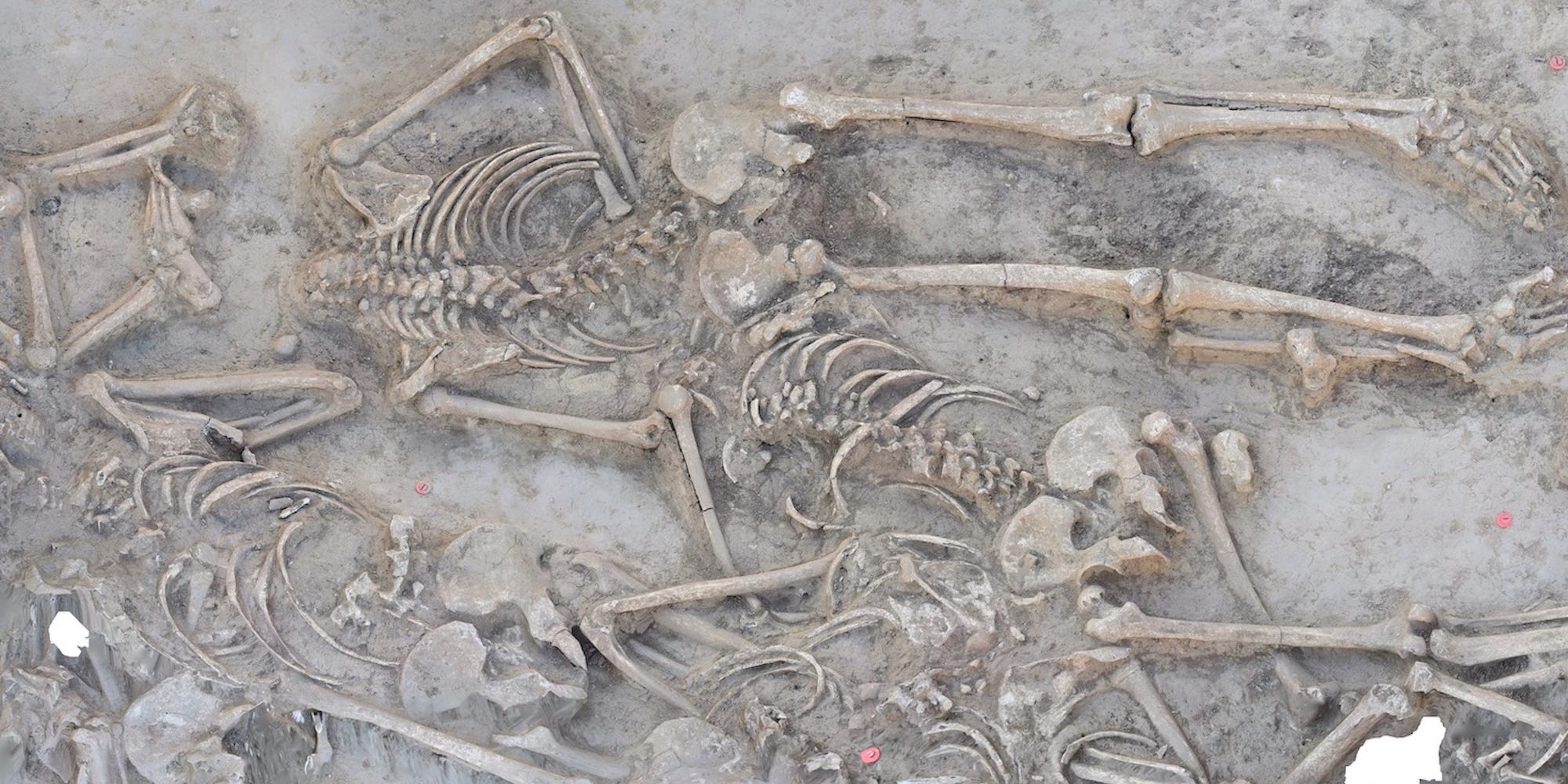 The skeletons were found with no head at the site of Vráble-Ve`lke Lehemby in Slovakia in 2022.

Dr. Till Kühl, Institute for Pre- and Protohistoric Archaeology/Kiel University

Archaeologists have discovered a 7,000-year-old mass grave in Slovakia containing 38 skeletons, with all but one decapitated.

The remains were found at the Vrá ble-Vèlke Lehemby site in Slovakia, one of the largest settlements of the European Neolithic period.

Early studies suggest the heads were removed purposefully after death, an author of the study told Insider. Only one skeleton belonging to a child under the age of 6 had its skull intact.

Archaeologists are now trying to understand why the heads were so methodically removed. Was this meant as a warning, a funerary ritual, or a way to honor the dead? 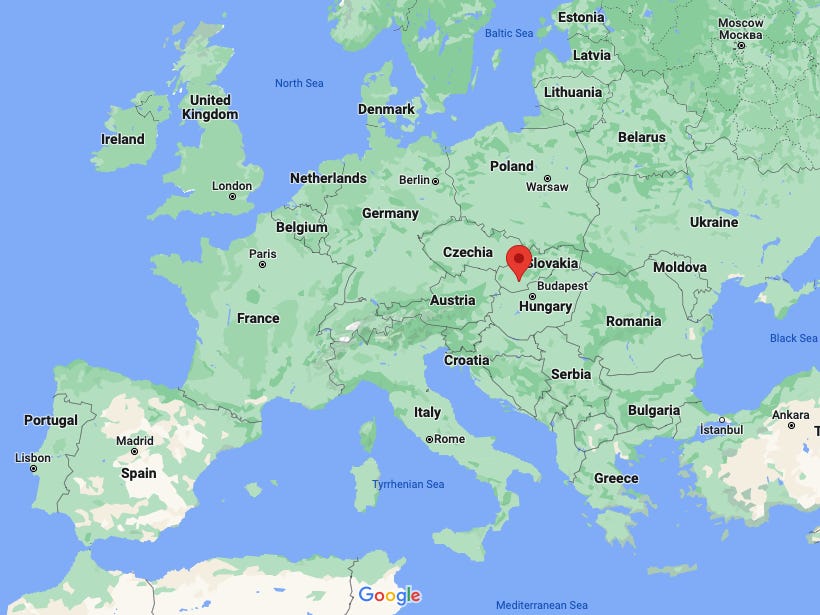 These headless bodies set themselves apart from traditional burials in the same region, said Katharina Fuchs, an anthropologist at Kiel University, Germany, who worked on the dig.

Early observation of the remains suggests the decapitations were likely intentional, she said in an interview with Insider. On the bodies preserved well enough to still have observable neck bones, the first vertebra, directly under the skull, was intact, she said.

This suggests the heads were severed with very sharp tools, rather than cut off during combat.

“When you have a violent decapitation, like in the medieval ages with a sword or with an axe, you would see cut marks and also crushed vertebra in the regions of the neck,” she said.

This is feasible since people in the area had access to obsidian, a rock that is razor sharp when broken.

Whether the head was removed before or after death is unclear, project leader Martin Furholt, a professor of prehistory and social archeology at Kiel University, told Insider in an email.

There have been several reports of Neolithic people decapitating bodies after their death and taking the head with them.

“People often kept those heads in their houses, or deposited them elsewhere,” said Furholt.

An act of war or a human sacrifice? 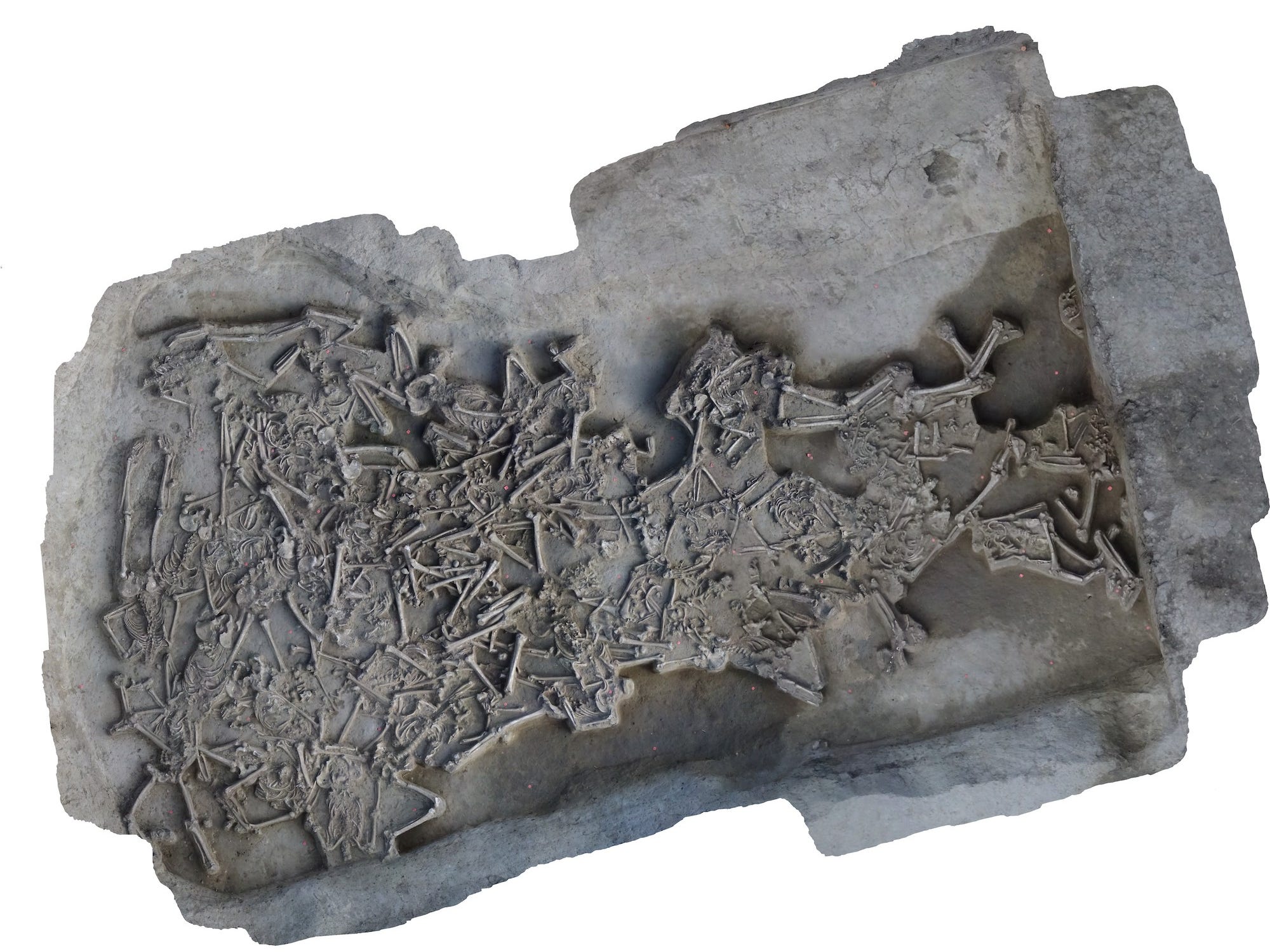 An aerial of the grave found in Vráble-Ve`lke Lehemby in Slovakia.

Dr. Till Kühl, Institute for Pre- and Protohistoric Archaeology/Kiel University

It’s perfectly feasible that these heads were removed as a violent act of war or deterrence, Fuchs said.

“There is a scenario of this killing event with taking the heads as trophies, for instance, and putting them on the palisades,” she said.

“We cannot rule that out.”

After all, although these were sophisticated farming communities, evidence suggests they could be brutal.

There are two other notable mass graves in the area, Talheim and Herxheim.

At the Talheim site, found in Germany, 34 men, women, and children’s remains tell the tale of a brutal conflict. It’s thought the victims were massacred by a neighboring village and left to rot.

At the Herxheim site, also in Germany, at least 450 individuals were found in a ditch, completely dismembered with cut marks on the bones and skulls. That suggests that flesh was cut from the bones before the bodies were put in the pit. A 2009 study suggested this could be evidence of ritual cannibalism, though this hypothesis has been rejected by some others who see this site as a big necropolis.

Neolithic people may also have considered the bodies to have magical powers, and that their bodies helped reinforce the strength of the palisades, Furholt said.

“In fact, many Neolithic enclosure ditches surrounding settlements all over Europe show depositions of dead human bodies or body parts,” he said, referring to the deposition at the Heixheim site as an example. 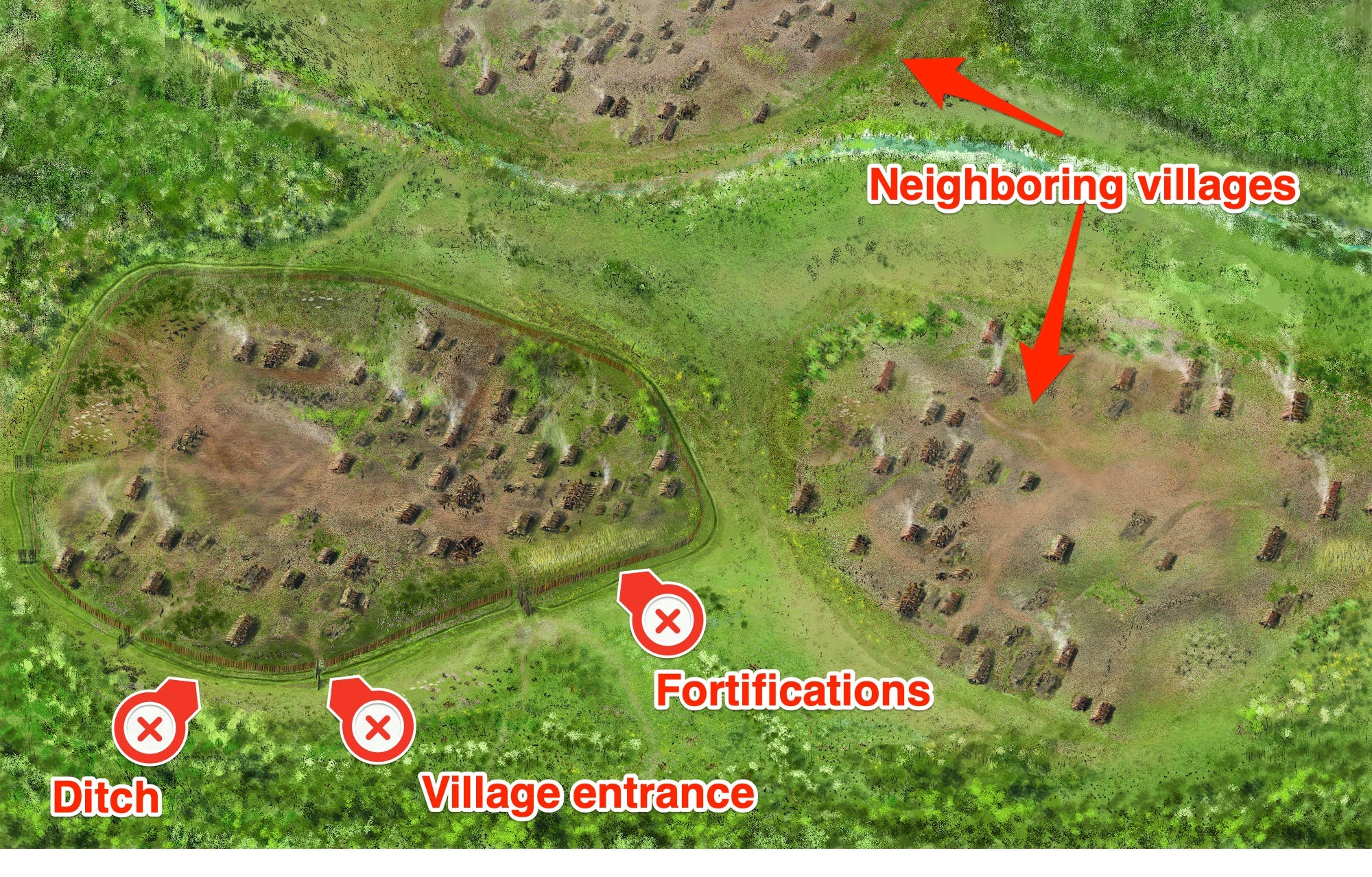 An annotated illustration shows the fortifications around the site.

Vráble-Vèlke Lehemby was made up of three settlements, occupied between BC 5,250 and BC 4,950.

The larger of these settlements, on the far right in the illustration above, was heavily fortified.

Pallisades surrounded the settlement. A ditch, where the mass grave was found, ran around the village over the length of approximately a mile. 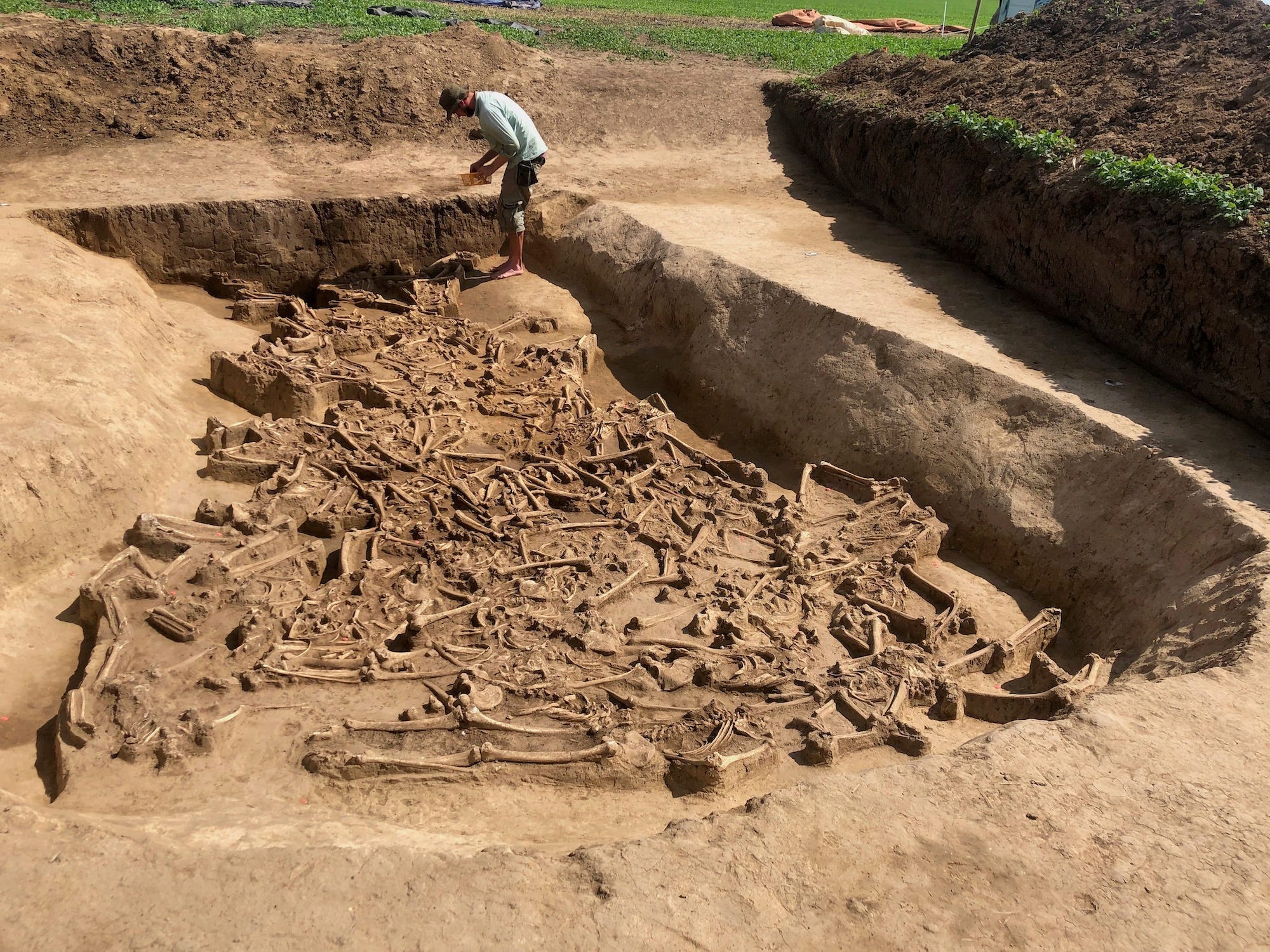 A picture shows the mass grave found in Vráble-Ve`lke Lehemby in Slovakia.

These weren’t the first headless bodies found in the ditch. Earlier excavations had uncovered a few other headless skeletons, but these were spread out much more sparsely, and interspersed with more normal burials.

That’s why the discovery of such a huge mass of headless bodies came as a complete surprise, Fuchs said.

There may be even more bodies in the grave. Fuchs said they had to stop digging because they were restricted to just over five weeks of excavation. But bones found at the edge of the grave suggest it carries on further than what they have found.

“There are many possibilities and it is important to remain open to new insights and ideas. But it is indisputable that this find is absolutely unique for the European Neolithic so far,” Maria Wunderlich, an archaeologist at Kiel University who worked on the dig, said.