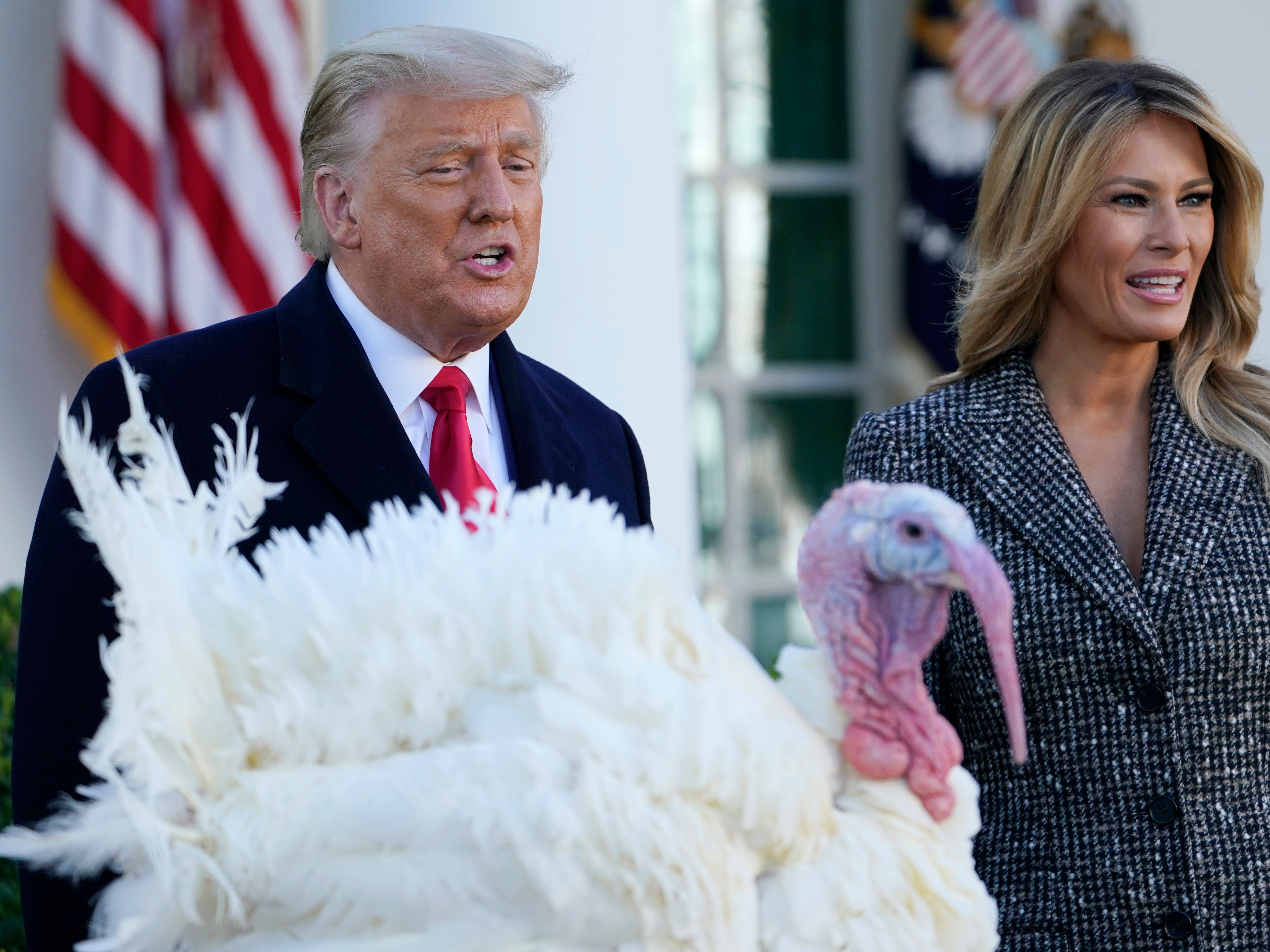 It’s the time of year when we give thanks to those in our lives who embody our most cherished virtues. Selflessness. Generosity. Forgiveness.

Donald J. Trump is that virtuous guy. At least that’s what lawyers defending his company from a 15-count tax-fraud indictment hope a Manhattan jury will believe once deliberations start as early as Tuesday.

For five weeks, jurors have heard defense tales of “Trump the Very Good Boss”: legends of a benevolent, if distant, corporate leader who, while not criminally charged, is ever present at the trial.

Lo! On the overhead projectors: There’s Trump’s scribbled initial “D” for Donald, his mark of approval on the invoices and memos behind a year-round bounty of free cars, rent, home furnishings, and other executive handouts.

Manhattan prosecutors have told jurors that because no one paid payroll taxes on these pricey plums, they’re all part of a tax-dodge scheme. Trump’s zig-zagging, Sharpie signatures are indelible scrawls of shame, proving his complicity in this scheme, prosecutors will argue.

But Trump’s lawyers have been pushing a two-prong defense against the prosecution’s notion that Trump, and the company itself, are criminally liable.

Defense prong one: Trump was in the dark. Even two company executives, the prosecution’s own star witnesses, say so.

Defense prong two: Trump’s signatures on scores of checks, memos and invoices now in evidence? All they prove is that Trump is a generous boss.

Let’s walk through how prosecutors can be expected to pick those two defenses apart next week.

These checks paid for the two tots’ Manhattan private school education for five years; they are arguably the most extreme example of a perk that couldn’t remotely be explained away as payroll-tax exempt, not in the same way other perks like a company car or company apartment can be.

Instead, under the “generous Trump” defense, the checks, written from Trump’s personal account, are explained away as not a suspicious, tax-dodging perk at all, but a “gift.”

“I was in Trump’s office, discussing some matters that day,” in 2012, Weisselberg told jurors, testifying November 17 under direct examination by Susan Hoffinger, the Manhattan district attorney’s chief of investigations and a lead prosecutor in the trial.

“And as I was leaving his office, Don Jr. walked in with I guess some bills for his children, for their school tuition,” at Columbia Grammar and Preparatory School, Weisselberg testified. All the Trump kids, including Trump’s son, Barron, went there.

Trump “jokingly” said, “I may as well pay your grandkid’s too,” Weisselberg told jurors of the lighthearted, totally non-tax-fraudulent moment on the 26th floor of Trump Tower on Manhattan’s Fifth Avenue.

“I listened to him and sort of chuckled,” Weisselberg remembered.

But Weisselberg also told jurors that after Trump cut him that first of five years worth of tuition checks, “I turned and said don’t forget, I’m going to pay you back for this.”

Weisselberg’s “tuition gift” story has a flaw, though.

The CFO deducted the value of this and other perks from his salary for many years, in an arrangement he testified was his idea alone. (Under the scheme, prosecutors say, Weisselberg and others got to enjoy their perks tax-free, while the company saved on salary and on payroll tax withholdings.)

But as state Supreme Court Justice Juan Merchan put it last week — and the prosecution will likely argue — “You don’t pay back a gift.”

So under the defense theory, Trump doled out a fortune in bonus checks each year like an absent-minded Father Christmas, in complete ignorance of the fact that the checks were part of payroll-tax fraud.

“Mr. Trump would like to hand those out?” Hoffinger, the lead prosecutor asked Weisselberg of the Christmas bonuses last week.

“Or have those go out to the employees along with Christmas cards that he wrote?”

But here’s a sticking point. Call it the round-number problem.

There were often, for Trump’s most senior executives, multiple Trump-signed checks stuffed in each Trump-signed holiday card.

That’s because as part of the alleged company scheme, executives got their bonuses piecemeal, in separate checks from multiple Trump Organization subsidiaries.

The subsidiaries — including Mar-a-Lago, Trump’s Palm Beach golf resort, even Trump’s production company for “The Apprentice” — wrote off these expenditures as if they were paying contractors, prosecutors have said.

The executives, meanwhile, pocketed the money as if they were being paid as contractors, an arrangement that Weisselberg explained let them claim it as freelance income, some of which they could then stash in tax-free savings accounts available only to the self-employed.

“Did those checks have round numbers on them? Forty-five thousand? Fifty thousand? Or a hundred thousand?” Hoffinger, the prosecutor, asked the ex-CFO, in what could well be seen as a “gotcha” moment.

Prosecutors will likely tell jurors during closing arguments that because of the round numbers on those stacks of checks he signed each year, it must have been obvious to Trump that no payroll withholding had been taken out of this compensation, as required by law.

Trump also had to know, prosecutors may argue, that these checks essentially paid his top Manhattan executives for no-show work for his Florida resort and golf club, his Central Park skating rink, and his television show.

“Were they always round numbers?” Hoffinger asked the ex-CFO.

“They were round numbers,” Weisselberg agreed.

Another hurdle the defense has hoped to clear is explaining to jurors why Trump has continued to keep paying six, even seven-figure salaries to Weisselberg and other executives implicated in the payroll scheme.

Weisselberg, in particular, is making $1.14 million in combined salary and bonus this year, essentially money for nothing, as he is currently on paid leave. This, despite a “betrayal” of the company so treacherous, it brought him to near tears to describe.

There may also be some late holiday cheer for Weisselberg on top of that $1.14 million. In January, a month or so after the trial ends, Weisselberg will learn if Eric Trump has re-upped his $500,000 bonus.

Did Weisselberg have 500,000 reasons to tell jurors, as he did throughout three days on the witness stand, that Trump was kept in the dark about a rampant, 15-year, C-suite-wide payroll-tax scheme?

Here, the defense can be expected to tell jurors that Trump is not only a generous boss, but a forgiving one, too.

Trump Organization lawyers have been working to make that impression on jurors since opening statements five weeks ago.

One defense lawyer, Michael van der Veen, went so far as to call Weisselberg a “prodigal son” who hurt his family — the Trump family, which has employed him since 1973 — but was welcomed back into the fold with, apparently, few hard feelings and the welcome gifts of a Trump-paid legal team and a tidy pile of cash.

It remains to be seen if jurors will believe that a few years after he pardoned, as president, his last Thanksgiving turkey, Trump forgave Weisselberg for a “secret” payroll scheme that could soon dent his company’s bottom line and reputation — or if this “Trump is generous” idea will turn out to be just a turkey of a defense.