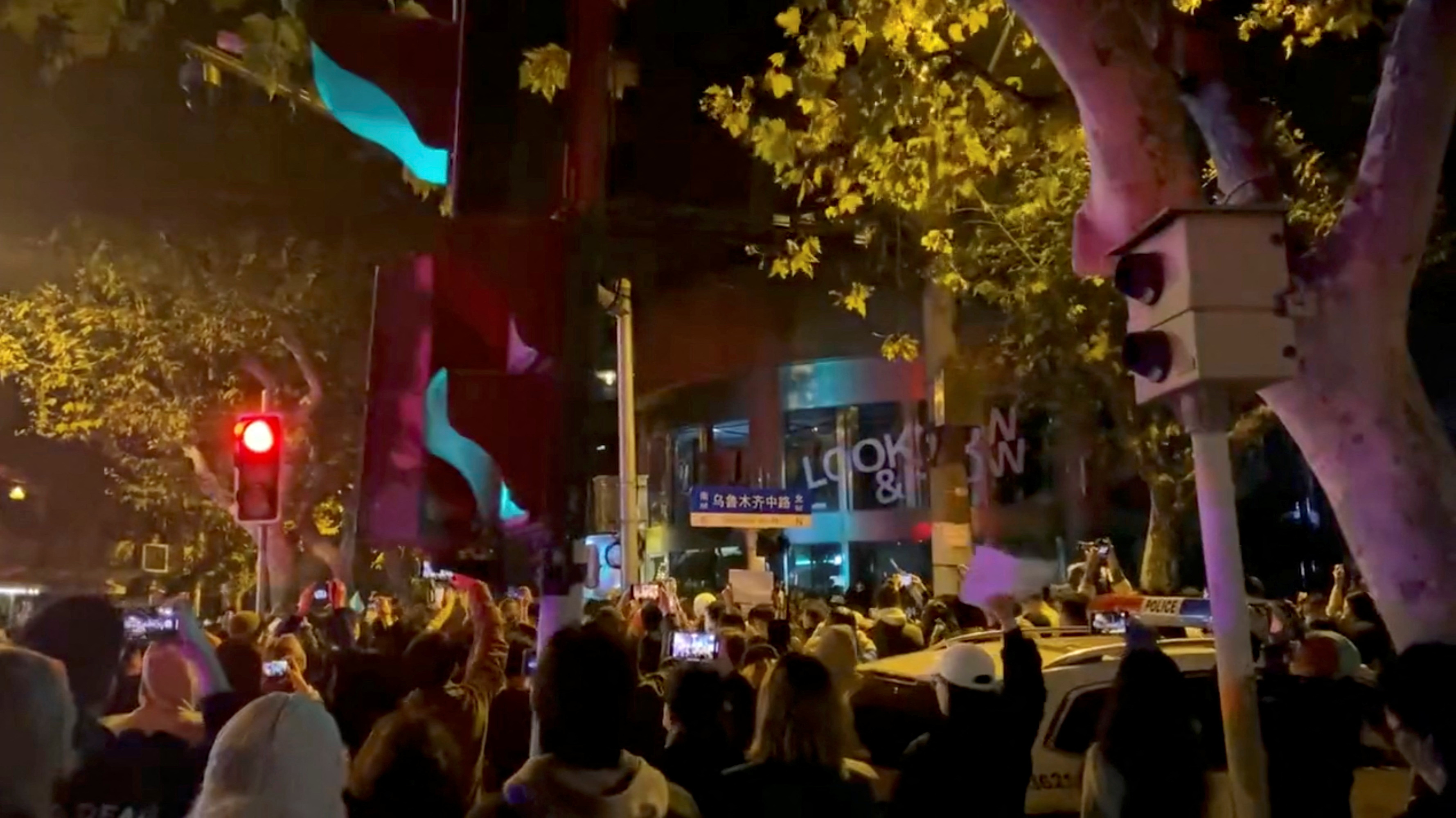 People protest against coronavirus disease (COVID-19) curbs, at the site of a candlelight vigil for victims of the Urumqi fire, in Shanghai, China, in this screengrab from a video realeased on November 27, 2022. Video obtained by Reuters/via REUTERS

Chinese protesters have turned to blank sheets of paper to express their anger over COVID-19 restrictions in a rare, widespread outpouring of public dissent that has gone beyond social media to some of China’s streets and top universities.

Images and videos circulated online showed students at universities in cities including Nanjing and Beijing holding up blank sheets of paper in silent protest, a tactic used in part to evade censorship or arrest.

China is adhering to its tough zero-COVID policy even while much of the world tries to coexist with the coronavirus.

The latest wave of anger was triggered by an apartment fire that killed 10 people on Thursday in Urumqi, a far western city where some people had been locked down for as long as 100 days, fueling speculation that COVID lockdown measures may have impeded residents’ escape.

In Shanghai, a crowd that started gathering late on Saturday to hold a candlelight vigil for the Urumqi victims held up blank sheets of paper, according to witnesses and videos.

One widely shared video said to be from Saturday, which could not be independently verified, showed a lone woman standing on the steps of the Communication University of China in the eastern city of Nanjing with a piece of paper before an unidentified man walks into the scene and snatches it away.

Other images showed dozens of other people subsequently taking to the university’s steps with blank sheets of paper，illuminated against the night sky by flashlights from their mobile phones.

A man could later be seen chiding the crowd for their protest.

“One day you’ll pay for everything you did today,” he said, in videos seen by Reuters.

“The state will also have to pay the price for what it has done,” people in the crowd shouted back.

Widespread in-person protests are rare in China, where room for dissent has been all-but eliminated under President Xi Jinping, forcing citizens mostly to vent on social media where they play cat-and-mouse games with censors.

Similar sheets of paper could be seen held by people gathering on the grounds of Beijing’s prestigious Tsinghua University to sing the Chinese national anthem on Sunday.

Protesters were advised to bring a sheet of white paper to at least one planned demonstration, according to tips being shared in chat groups seen by Reuters.

At the height of the Hong Kong protests in 2020, activists there also raised blank sheets of white paper to protest to avoid slogans banned under the national security law. Demonstrators in Moscow have also used them this year to protest Russia’s war with Ukraine.

One Beijing resident surnamed Wang, who joined his neighbours on Saturday in pressuring local authorities to release his apartment from lockdown, described his sadness at hearing about “secondary disasters” involving the COVID policy.

Wang was referring to incidents in China which provoked anger on social media, including a pregnant woman who miscarried after being refused entry to a Xian hospital in January, the deadly crash of a bus in Guizhou ferrying people being quarantined, and a young boy in Lanzhou who died from gas poisoning while under lockdown.

“Any of that could have happened to me or my wife,” he told Reuters.

Several Internet users showed solidarity by posting blank white squares or photos of themselves holding blank sheets of paper on their WeChat timelines or on Weibo. By Sunday morning, the hashtag “white paper exercise” was blocked on Weibo, prompting users to lament the censorship.

“If you fear a blank sheet of paper, you are weak inside,” one Weibo user posted.