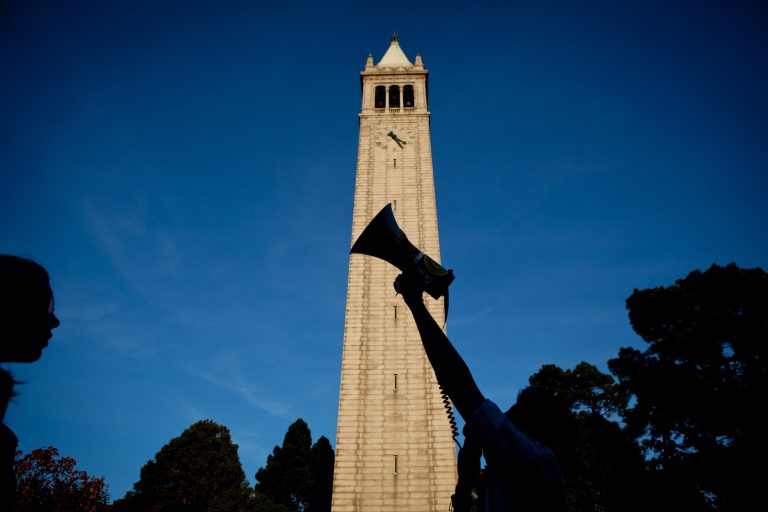 The University of California, Berkeley, Law School suffers from “profound and deep-seated anti-Semitic discrimination,” according to a copy of a complaint filed against the school with the Education Department and reviewed by the Washington Free Beacon.

The complaint—submitted last week by a Florida-based attorney and the International Legal Forum, a global watchdog that fights anti-Semitism—alleges anti-Israel and anti-Semitic bias at the law school after nine student groups in August adopted bylaws that ban Zionist speakers from the campus.

The school’s decision to go along with the ban on pro-Israel speakers constitutes a violation of the 1964 Civil Rights Act, which prevents recipients of federal funds from discriminating based on race and national origin, according to the complaint. The petitioners urge the Education Department’s Office of Civil Rights to immediately “open an investigation against the University of California, Berkeley, Law School” and order it to remove this ban on Zionists.

The complaint comes amid a rise in anti-Semitism on America’s college campuses. Assaults on Jewish students and their identity doubled in the 2021 to 2022 academic year especially at schools with large Jewish populations, the Free Beacon reported last week. Last month at George Washington University, for instance, flyers stating “Zionists Fuck Off” were affixed on the campus’s Hillel building, a center for Jewish life. The Hillel building at the University of Southern California in August was also defaced, with vandals smashing the building’s front side.

The Education Department must determine whether Berkeley Law is violating the Civil Rights Act and then force the university to “invalidate the bylaws in question,” according to the complaint. The watchdog also wants Berkeley’s leaders to ensure that any group endorsing the anti-Zionist provisions is blocked from receiving school funds and has its status as a “recognized student organization” revoked. Students and faculty should also be required to participate in training that will foster a campus environment “free of anti-Semitic harassment and discrimination,” according to the complaint.

There is precedent for the Education Department to involve itself in the matter. The federal agency is helming a probe into the University of Southern California over allegations the school fomented “a hostile environment of anti-Semitism.” That investigation was launched after a watchdog group submitted evidence of anti-Semitic discrimination similar to that included in the complaint targeting Berkeley Law.

A spokesman for Berkeley Law told the Free Beacon that the school “seeks to avoid commenting on complaints” filed with the Education Department’s Civil Rights Office. The spokesman also said he was not aware of the specific complaint.

While Berkeley Law officials, including Dean Erwin Chemerinsky, have sought to downplay the issue, with Chemerinsky saying that “only a handful of student groups out of over 100 at Berkeley Law did this,” the legal advocates say this excuse is unacceptable.

“It is unfathomable that a similar statement would ever be made that ‘only a handful’ of student groups banned speakers of any other ethnic, religious, or racial group,” states the complaint, which was authored in part by Gabriel Groisman, a Florida-based attorney and Jewish rights leader. “Yet such blatant discrimination directly targeted against Jews is being excused, justified, and mainstreamed. The university’s posture is untenable under the law.”

The complaint further says that Chemerinsky “has neither called for [the groups’] revocation, nor has he taken any meaningful action in response to this egregious act of discrimination.”

The August resolution sparked fierce debate on Berkeley’s campus and within the pro-Israel advocacy world. It stated that nine officially recognized student groups “will not invite speakers that have expressed and continued to hold views or host/sponsor/promote events in support of Zionism, the apartheid state of Israel, and the occupation of Palestine.” The organizations employ rhetoric commonly used by Israel’s enemies, including supporters of the anti-Semitic Boycott, Divestment, and Sanctions movement, which wages economic warfare on Israel.

At the heart of the complaint is the allegation that these groups are targeting Jewish and pro-Israel students based on their religious identity or national backgrounds. This “forced exclusion” of primarily Jewish students, the complaint states, “is illegal and a flagrant violation of Title VI of the Civil Rights Act.”

“There can be no equivocation: Anti-Zionism is anti-Semitism,” the complaint says.

“By effectively saying ‘Zionists are not welcome,’ these student group—and by extension Berkeley, from its failure to act—are excluding, marginalizing, and silencing Jews, and contributing to the creation of a hostile environment for Jewish students, faculty, and staff, in circumstances [where] anti-Semitism, including on campus, is already at record high levels across the United States,” according to the complaint.

Groisman, the lawyer handling the case along with the International Legal Forum, told the Free Beacon that couching Jew-hatred in the language of anti-Zionism will not prevent Berkeley from being investigated for discrimination.

“Federal laws are in place to protect students from discriminatory actions,” he said. “The student groups at UC Berkeley tried to be cute by hiding their discrimination against Jews by excluding Zionists. We are confident that the U.S. Department of Education will see right through them and protect the students under the protections afforded by Title VI.”