The FBI on Friday released nearly 750 pages of documents from the bureau’s file on the the late Roy Cohn, the controversial, hyper-aggressive lawyer whose high-profile clients included President Donald Trump when Trump was a fledgling real estate mogul in New York City.

“Where’s my Roy Cohn?” Trump has been quoted lamenting when he was faced with political and legal pressures.

Cohn was famous — and infamous — for his work for Sen. Joseph McCarthy of Wisconsin in the 1950s investigating suspected infilitration by communists in U.S. government agencies, as well as his role prosecuting Soviet spies Julius and Ethel Rosenberg, who were executed for stealing American atomic secrets.

In the Rosenberg case, Cohn later admitted to conversations with the trial judge outside of the presence of the Rosenberg lawyers — a serious ethical breach by both Cohn and the judge.

Stone currently is under indictment for lying to Congress, witness tampering and obstructing justice, charges related to his alleged efforts to get WikiLeaks to release emails stolen from Democrats during the 2016 presidential campaign. He has pleaded not guilty in that case.

The release of the FBI’s Cohn files comes on the heels of a new documentary that uses Trump’s quote “Where’s my Roy Cohn?” as its title.

The vast majority of the FBI files include details of an investigation into Cohn for perjury, conspiracy and obstruction of justice in connection with a grand jury probe of an alleged $50,000 bribe Cohn paid the then-chief assistant U.S. attorney in Manhattan to keep several stock swindlers from being indicted in 1959.

Cohn was found not guilty after a trial in that case in 1964.

A number of the files were sent directly to J. Edgar Hoover, the FBI’s director at the time, and reflect the bureau’s painstaking efforts to acquire information about trips by Cohn to Las Vegas in 1959, and other evidence, in connection with the bribery case.

One memo that was sent in July 1962 to both Hoover and then-Attorney General Robert Kennedy details the claim by a source of the FBI’s Las Vegas office.

The source said that gamblers in that city, worried about “extreme pressure” being applied by the federal government on the Nevada gambling industry, had approached the Justice Department’s criminal division chief “to determine whether he would ‘trade Las Vegas’ for ‘Roy Cohn.’”

A small part of the files released Friday include a letter that Cohn sent Hoover in 1969, when Cohn was being prosecuted on other federal criminal charges, for which he ultimately was acquitted. 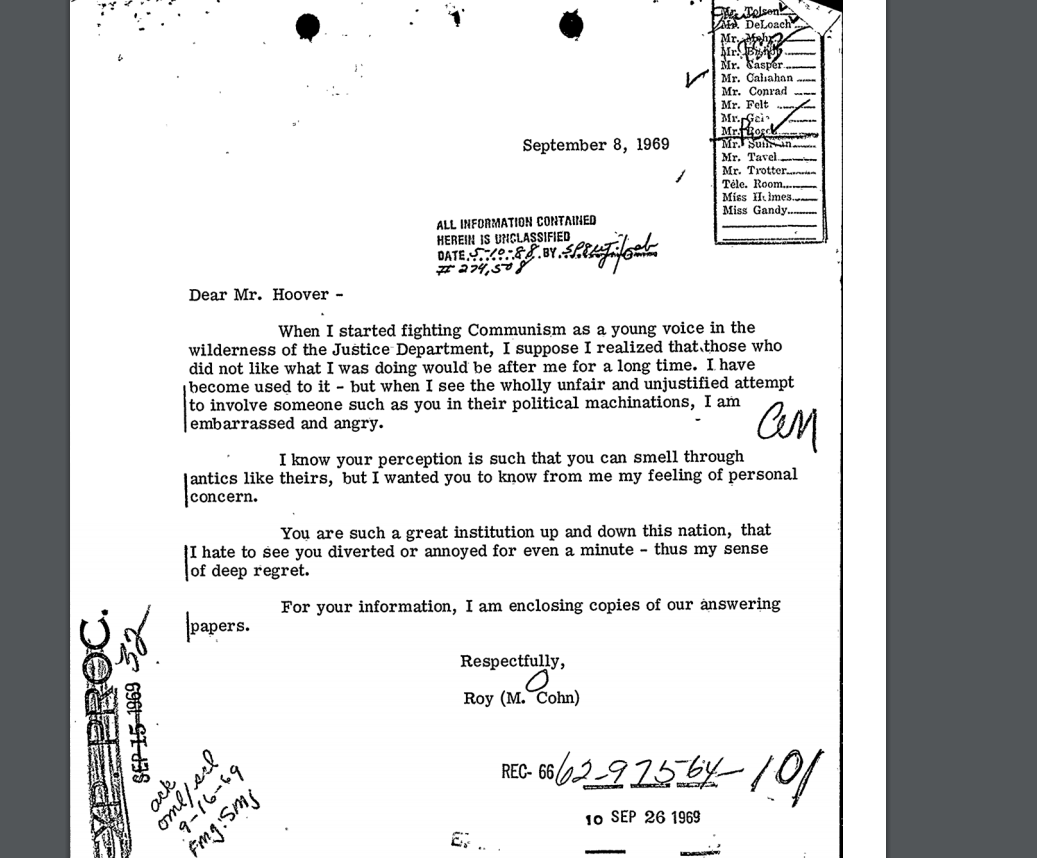 The Washington Post in 2016 described an early meeting between Trump and Cohn in 1971, at a hot spot called Le Club.

“Trump introduced himself to Cohn, who was sitting at a nearby table, and sought advice: How should he and his father respond to Justice Department allegations that their company had systematically discriminated against black people seeking housing?”″ The Post reported.

“My view is tell them to go to hell,” Cohn said, according to the Post. “And fight the thing in court.”

Cohn died in 1986 from complications of AIDS, less than two months after being disbarred for professional ethics violations.

Despite years of using rumors about the homosexuality of his foes to smear them, Cohn himself was gay. He claimed until his death that he had liver disease, not AIDS.

Cohn’s closeted sexuality, ruthlessness against alleged communists and role as a bete noire of the left in the United States led to him being featured as a prominent character in Tony Kushner’s landmark play, “Angels in America.” Al Pacino portrayed Cohn in the HBO adapation of that drama.

Cohn was one of two personal lawyers for Trump to be disbarred, in his case for a range of misconduct.

Trump denies having sex with Daniels or with another woman, Playboy model Karen McDougal, who received another hush money payout before the 2016 election that was facilitated by Cohen.

Earlier this week, a relative of Cohn’s wrote a column for Politico Magazine entitled “I’m Roy Cohn’s Cousin. He Would Have Detested Trump’s Russia Fawning.”

“Roy often told me the Kremlin blamed the U.S. for Russia’s failure to prosper, so Russian leaders were bent on destroying our democracy. If Roy had lived another 30 years, I’m sure he’d be pleased to learn that his protégé was elected president. But I am equally sure Roy would be appalled by Trump’s obsequious devotion to ex-KGB officer Vladimir Putin.”