In light of the problems that have been encountered first by President Trump and now by President Biden over handling of classified documents, many are wondering about the system. This piece is an explanatory note on the classification system.

The federal government has a fairly simple process for classifying documents. The originator of a document, usually a foreign policy or national security staff member, decides if it needs to be classified. In almost all cases this is a simple decision. Has its predecessor’s been classified? If so classify. Each federal agency has a central repository that employees connect with when producing a classified document which gives the document a number so it can be identified later, and the actual originating component contacted.

Critics of the system have argued that too many documents are classified. However, that is an endemic problem because bureaucratically it is safer to classify than not.

The most sensitive documents are Top Secret Codeword documents. Almost every product of the National Security Agency is Top Secret because the Agency engages in intercepting and decoding sensitive communications of foreign countries and individuals.

TS (Top Secret) material must be stored in a SCIF office which stands for (sensitive compartmented information facility.) Only personnel with a TS clearance can enter the SCIF. When not in use the room is locked. Presidents often have a temporary SCIF on their property or vacation homes. Presidents and VPs travel with a large communications team so they are always in constant contact with the Situation Room including when abroad.

Most State Department cables are SECRET. Some are CONFIDENTIAL, the lowest classification. Many of the most sensitive State documents are marked NODIS, which stands for No Distribution, meaning that they can only be read by a named individual or by selected positions.

A frequent classification is NOFORN, meaning the document cannot be shared with any foreign government or individual. In most cases this does not apply to the Five Eyes group: the United Kingdom, Canada, Australia, New Zealand, and the US. NATO allies, Japan, South Korea, and others get considerable access as well.

Routine cables that deal with travel arrangements and personnel issues are often classified Limited Official Use for short periods of time so that once the travel is complete the cables are declassified.

The office of the President has access to all classified material. The Situation Room in the basement of the West Wing is the focal point for receiving reports from across the government and distributing them to appropriate people in the White House complex—usually electronically. Created by John F. Kennedy in 1961, the Situation Room is manned by CIA officers 24 hours every day. It is in constant communication with its counterparts like the National Military Command Center in the Pentagon and the Operations Center at the CIA.

The President and Vice President are cleared for all classified information but often see only a small number of documents due to their intense schedules. The National Security Adviser usually selects the most important reports for the President.

When the CIA briefer delivers the PDB (president’s daily brief) each morning to the Oval Office or wherever the president is, the National Security Adviser’s office is responsible for retrieving it at the end of the day and securing it in their SCIF in the West Wing or in the Situation Room. If the President or VP write a question or comment in the book it goes back to Langley for a response. In my experience the President did not keep classified material, if he wanted to have it available then the Situation Room held onto it.

All classified documents are subject to periodic review for declassification. TS reports may take decades to be reviewed. Some will be reviewed and remain classified. Most will be declassified in part or entirely.

The President has the authority to declassify any document. In 1999, for example, President Bill Clinton used the conclusion of a TS report from the President’s Daily Brief prepared by the CIA in a meeting on July 4th with the Pakistani Prime Minister. He asked permission from the Deputy Director of the Agency just before he used it. In my eight years in the White House with four presidents it was the only time I witnessed a President declassify a report to use with a foreign official.

That time it helped avert a nuclear war. 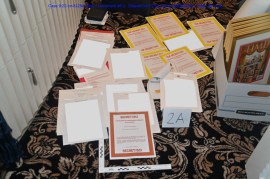