(NewsNation) — After his grandfather died, Caitlin Sawyer’s son Levi started acting out and struggled to transition from pre-K to kindergarten at his rural elementary school in Crete, Nebraska.

“He was having a really hard time following directions from his teacher — just lining up, coming inside, sitting, putting things away,” Sawyer said. “At home, we were noticing more aggression, specifically toward me — defiance, hard times with routines and transitions.”

To address her son’s behavior, Sawyer, who is also a special education teacher, teamed up with the school’s psychologist to create a plan using a program called Teachers and Parents and Partners, or TAPP.

TAPP works by getting parents and educators talking to each other. It then follows up by making communication a habit, and offering specific tactics based on the information shared about what’s happening at both home and at school. It trains school psychologists and other specialists in how to implement the method and work with teachers and parents.

TAPP is being tested in big cities and small towns. But the program’s founders are particularly interested in what it could do in rural schools. The project is in the midst of a five-year research project to create an online version designed specifially to help rural districts; the program Sawyer took part in was part of that research.

“Rural schools … tend not to have special programs for behavioral, social-emotional and mental health challenges, nor do the rural communities surrounding them,” said Susan Sheridan, TAPP’s lead consultant and the director of the Nebraska Center for Research on Children, Youth, Families and Schools at the University of Nebraska-Lincoln.

TAPP’s premise sounds like a no-brainer: Building good relationships between parents and teachers is almost universally recognized as important. Despite that, however, teachers and parents often don’t communicate regularly. One survey conducted during the 2015-2016 school year found that just 42 percent of students had parents who said they were contacted by telephone about their children. Meanwhile, surveys of teachers have shown that many struggle with reaching and engaging parents.

“Even as an educator, there were times I would kind of lose sight of things that I knew, just because it was happening with my own child and it wasn’t happening with a student at school,” Sawyer said. “So being in those meetings, it was really helpful to have other members of the team that you know are looking out for your child.”

Sawyer met with Levi’s teacher and the school psychiatrist, Cassandra Ginapp, to learn what concerns they had about her son’s behavior, and developed a plan that would carry over from home to school.

From the TAPP process, Sawyer put into place a new bedtime routine: She would use a timer to inform her son how long he had before he needed to be in bed. She paired this with a sticker chart where he could earn rewards for good behavior.

Meanwhile, his teacher and Ginapp began to work on his behavior at school. He was placed close to his teacher so she could give him silent signals if he needed help redirecting and focusing. When he did a good job, he would earn additional duties.

“So for him, being the teacher helper, being the line leader, those were key things that he really responded well to. So that’s what she would have him work toward,” Ginapp said.

By the end of the process, which took about nine weeks, Sawyer noticed considerable changes in her son.

“What I noticed most with him was he was able to process through his emotions with me more. The aggression stopped. He was able to talk to me more. We both got into a rhythm and figured each other out,” she said.

Sheridan, the TAPP founder, said that the program is particularly relevant in rural schools.

“In these situations, it is especially important that services support not just the student but also build capacities of parents and teachers, since they are the adults who can continue to provide positive and effective supports to youth,” she said.

Sheridan and her colleagues have performed several studies of TAPP as it has been implemented in a range of districts across the country. Those studies found that implementing TAPP reduces behavior issues such as temper tantrums and yelling. 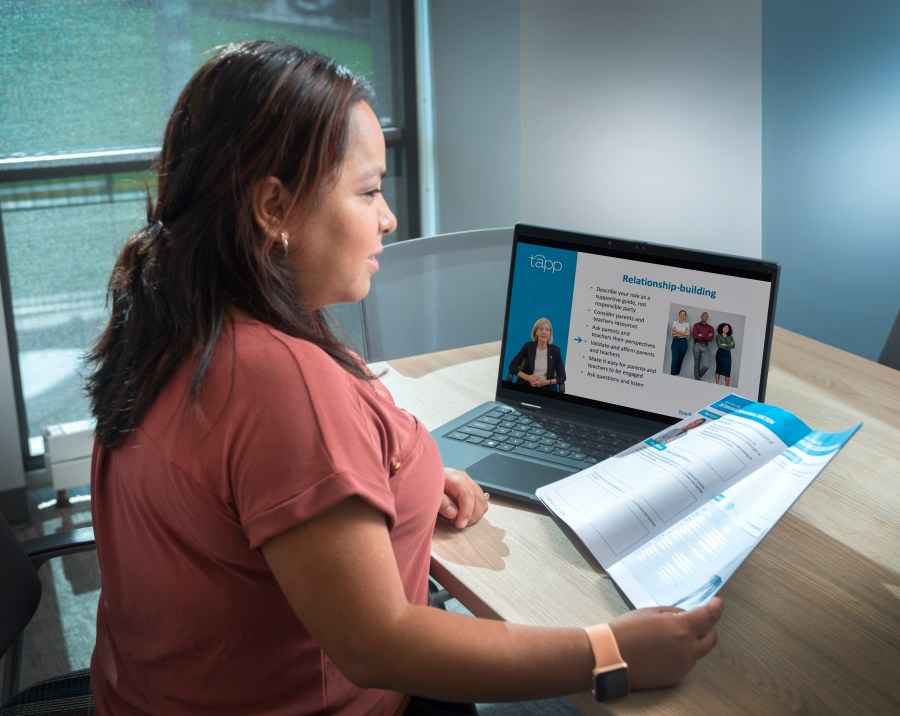 The TAPP coursework. Photo by Alan Jackson/Jackson Studios, copyright 2022, Board of Regents of the University of Nebraska.

Although she had no estimate of how often TAPP is currently being used, she noted that hundreds of people have been trained in the TAPP process. It is currently being implemented in districts in rural Colorado, rural Nebraska and the Madison Metropolitan School District in Wisconsin.

It’s not a perfect system. Ginapp noted that TAPP only works when everyone involved makes an effort.

For Sawyer, the process was invaluable.

“I think that there isn’t enough emphasis on the relationship between parents and teachers, especially with students that are struggling with behavior, whether that be emotional regulation, other things happening at home. I feel like there’s a lot of power in communication and teamwork between their teacher and parents,” Sawyer said.