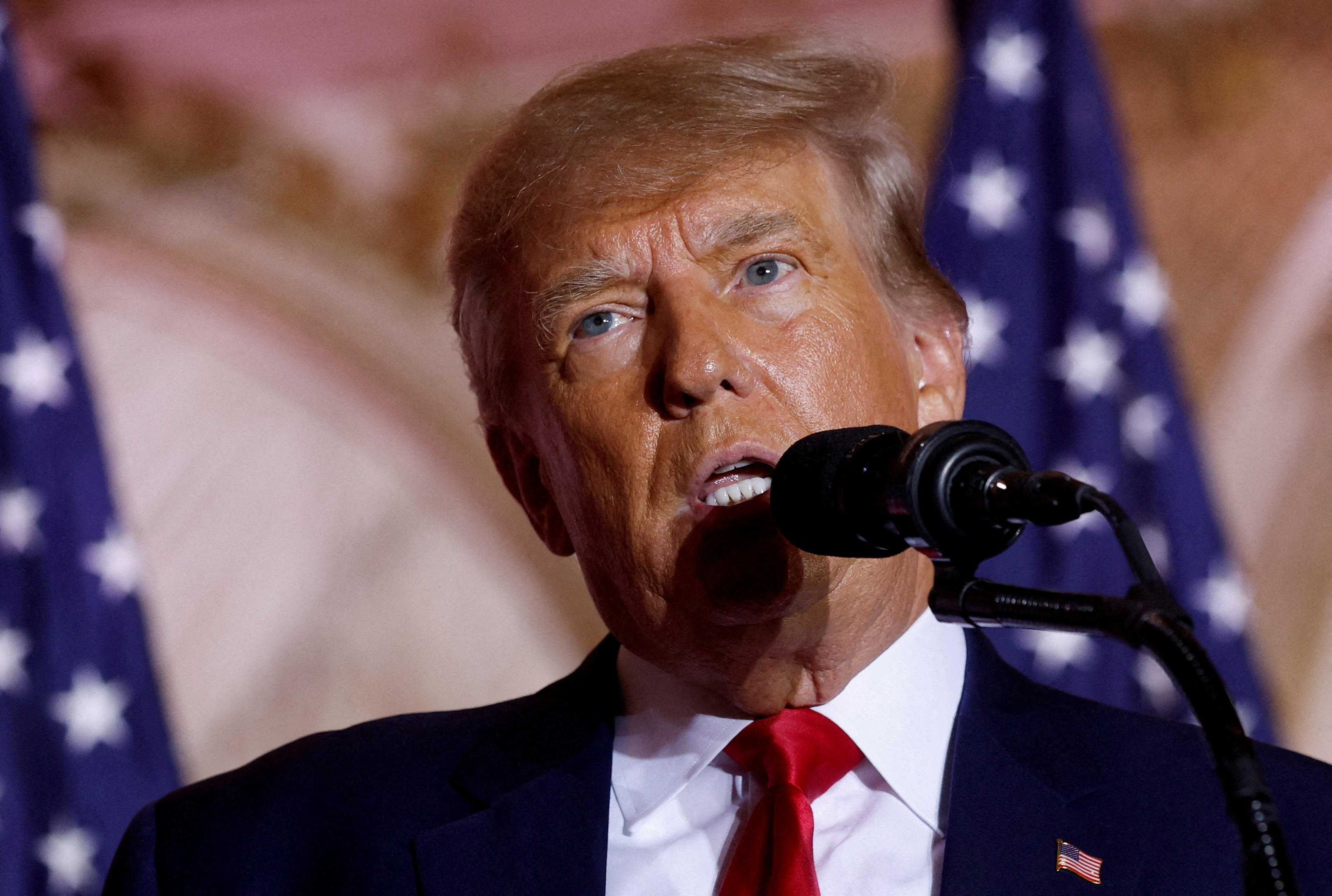 Former U.S. President Donald Trump announces that he will once again run for U.S. president in the 2024 U.S. presidential election during an event at his Mar-a-Lago estate in Palm Beach, Florida, U.S. November 15, 2022. REUTERS/Jonathan Ernst

The restoration of his accounts could provide a boost to Trump, who announced in November he will make another run for the White House in 2024. He has 34 million followers on Facebook and 23 million on Instagram, platforms that are key vehicles for political outreach and fundraising.

Free speech advocates say it is appropriate for the public to have access to messaging from political candidates, but critics of Meta have accused the company of lax moderating policies.

Meta said in a blog post Wednesday it has “put new guardrails in place to deter repeat offenses.”

“In the event that Mr. Trump posts further violating content, the content will be removed and he will be suspended for between one month and two years, depending on the severity of the violation,” wrote Nick Clegg, Meta’s president of global affairs, in the blog post.

The decision, while widely expected, drew sharp rebukes from civil rights advocates. “Facebook has policies but they under-enforce them,” said Laura Murphy, an attorney who led a two-year long audit of Facebook concluding in 2020. “I worry about Facebook’s capacity to understand the real world harm that Trump poses: Facebook has been too slow to act.”

The Anti-Defamation League, the NAACP, Free Press and other groups also expressed concern Wednesday over Facebook’s ability to prevent any future attacks on the democratic process, with Trump still repeating his false claim that he won the 2020 presidential election.

Others said it was the right decision.

Jameel Jaffer, executive director at the Knight First Amendment Institute at Columbia University and a former ACLU official, defended the reinstatement. He had previously endorsed the company’s decision to suspend Trump’s account.

“The public has an interest in hearing directly from candidates for political office,” said Jaffer. “It’s better if the major social media platforms err on the side of leaving speech up, even if the speech is offensive or false, so that it can be addressed by other users and other institutions.”

The decision to ban Trump was a polarizing one for Meta, the world’s biggest social media company, which prior to the Trump suspension had never blocked the account of a sitting head of state for violating its content rules.

The company indefinitely revoked Trump’s access to his Facebook and Instagram accounts after removing two of his posts during the Capitol Hill violence, including a video in which he reiterated his false claim of widespread voter fraud during the 2020 presidential election.

It then referred the case to its independent oversight board, which ruled that the suspension was justified but its indeterminate nature was not. In response, Meta said it would revisit the suspension two years after it began.

Meta’s blog post Wednesday suggested it may reactivate other suspended accounts, including those penalized for their involvement in civil unrest. The company said those reinstated accounts would be subject to more stringent review and penalties for violations.

Whether, and how, Trump will seize upon the opportunity to return to Facebook and Instagram is unclear.

Trump has not sent any new tweets since regaining his account on Twitter, saying he would prefer to stick with his own app Truth Social. But his campaign spokesman told Fox News Digital last week that being back on Facebook “will be an important tool for the 2024 campaign to reach voters.”

In a post on Truth Social, Trump responded to his reinstatement on Meta apps, saying: “Such a thing should never again happen to a sitting President, or anybody else who is not deserving of retribution!” He did not indicate if or when he would begin posting on Meta platforms again.

Representative Adam Schiff, a Democrat who previously chaired the House Intelligence Committee, criticized the decision to reinstate him.

“Trump incited an insurrection,” Schiff wrote on Twitter. “Giving him back access to a social media platform to spread his lies and demagoguery is dangerous.”