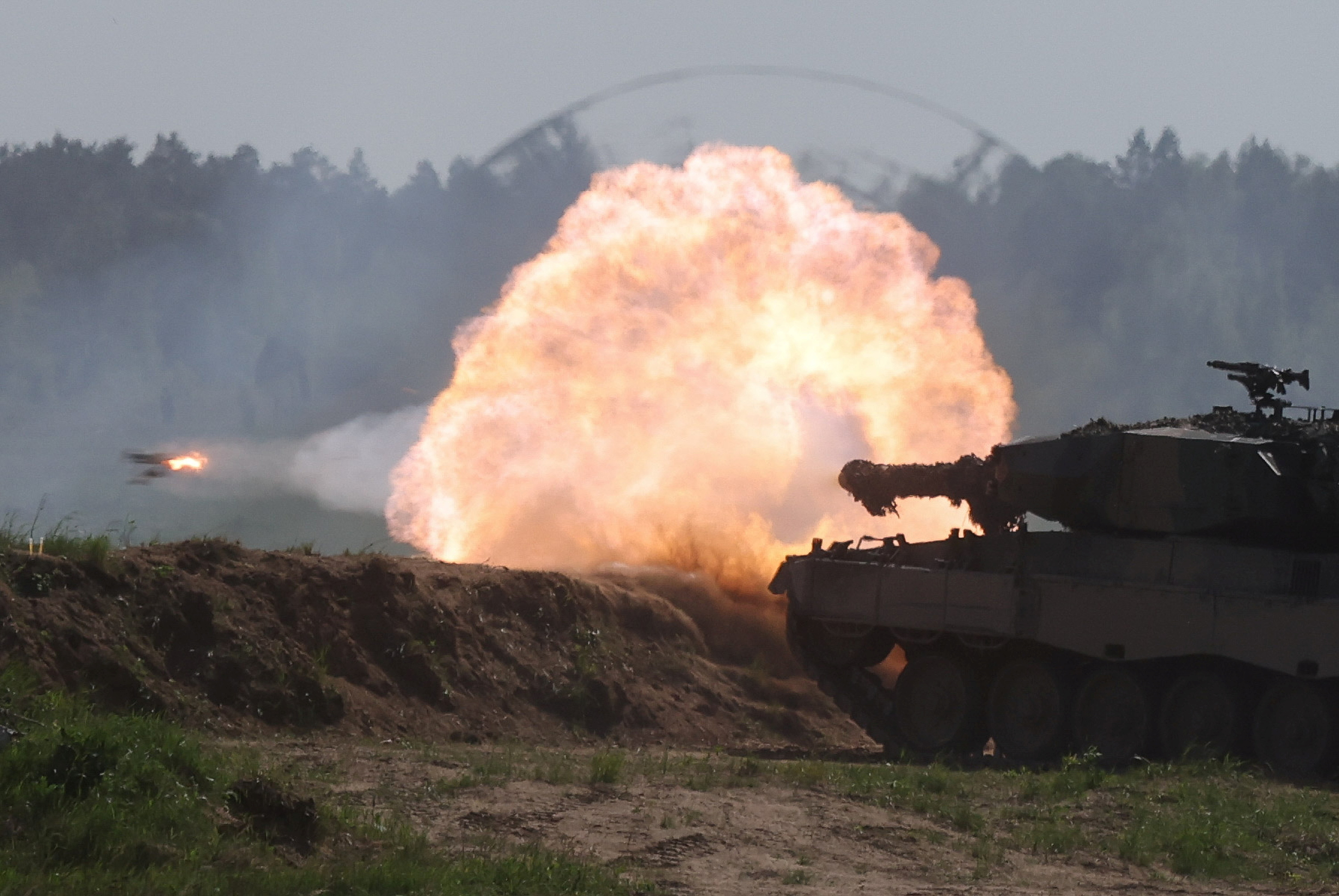 A Polish Leopard 2PL tank fires during Defender Europe 2022 military exercise of NATO troops including French, American, and Polish troops, amid the Russian invasion of Ukraine, at the military range in Bemowo Piskie, near Orzysz, Poland May 24, 2022. REUTERS/Kacper Pempel

Poland’s prime minister said on Monday his government would ask Germany for permission to send Leopard tanks to Ukraine, and planned to send them whether or not Berlin agreed.

Germany’s foreign minister had said on Sunday that Berlin would not stand in the way if Poland wanted to do so.

The issue of supplying the German-made Leopard 2 tanks to Ukraine has dominated recent discussions among Western allies about how much and what sort of material aid they should give Ukraine as the first anniversary of the Russian invasion nears.

The development comes as both sides are believed to be planning spring offensives to break deadlock in what has become a war of attrition in eastern and southern Ukraine.

Current fighting is centred on the town of Bakhmut in the east, where Russia’s Wagner mercenaries and Ukrainian forces have been locked in battle. Russia said on Sunday its forces were improving their positions in Ukraine’s southern region of Zaporizhzhia.

Ukrainian President Volodymyr Zelenskiy meanwhile was grappling with a corruption scandal which could dampen Western enthusiasm for his government.

A newspaper reported that the military had allegedly secured food at highly inflated prices, and a deputy minister resigned after an investigation into allegations he accepted a bribe.

Ukrainian officials have been pleading with Western allies to supply them with Leopard tanks for months, but Germany has held back from sending them or allowing other NATO countries to re-export them. Leopards, held by an array of NATO countries, are seen by defence experts as the most suitable for Ukraine.

Polish Prime Minister Mateusz Morawiecki said Warsaw would ask Germany for permission to re-export tanks to Ukraine, “but this is an issue of secondary importance.

“Even if we did not get this approval … we would still transfer our tanks together with others to Ukraine”, he told reporters. “The condition for us at the moment is to build at least a small coalition of countries.”

Western allies pledged billions of dollars in weapons for Ukraine last week but they failed to persuade Germany to lift its veto on providing the tanks.

But in an apparent shift in Germany’s position, foreign minister Annalena Baerbock said on Sunday her government would not block Poland if it tries to send its Leopards.

Baerbock’s remarks appeared to go further than Chancellor Olaf Scholz’s comments at a summit in Paris earlier that day that all decisions on weapons deliveries would be made in co-ordination with allies, including the United States.

Ukraine says the heavily armoured battle tanks would give its ground troops more mobility and protection ahead of a new Russian offensive expected in coming months.

American lawmakers pushed their government on Sunday to export M1 Abrams main battle tanks to Ukraine, saying that even sending a symbolic number would help push European allies to do the same. Washington has so far held off on promising its tanks, which run on fuel-hungry turbine engines it believes make less sense for Ukraine than Leopards.

Britain has said it would supply 14 Challenger 2 tanks to Ukraine. French President Emmanuel Macron said he did not rule out the possibility of sending Ukraine Leclerc tanks. The British and French tanks are much less widely available than Leopards.

A close ally of President Vladimir Putin said on Sunday that deliveries of offensive weapons to Kyiv that threaten Russia’s territories would lead to a global catastrophe and make arguments against using weapons of mass destruction untenable.

Vyacheslav Volodin, speaker of Russia’s lower house of parliament, warned that the United States and NATO’s support of Ukraine was leading the world to a “terrible war”.

The ministers will also discuss using Russian assets frozen in Europe under sanctions – including 300 billion euros ($327 bln) worth of the Russian central bank reserves – and using the money to help rebuild Ukraine from the war.

Since its invasion on Feb. 24, 2022, which it has cast as defending itself from an aggressive West, Russia has taken control of parts of Ukraine and has said it will never return them. Ukraine has said that restoring its territorial integrity is not open for negotiation.

Also on Monday, Russia’s foreign intelligence service (SVR) accused Ukraine of storing Western-supplied arms at nuclear power stations across the country. It provided no evidence and Reuters was unable to verify the claims.

The SVR said U.S.-supplied HIMARS rocket launchers, air defence systems and artillery ammunition had been delivered to the Rivne nuclear power station in the northwest of Ukraine.

The United Nations nuclear watchdog has expressed grave concerns over attacks near the Zaporizhzhia plant, warning of the risk of a nuclear disaster.