Protests in Stockholm on Saturday against Turkey and Sweden’s bid to join NATO, including the burning of a copy of the Koran, sharply heightened tensions with Turkey at a time when the Nordic country needs Ankara’s backing to gain entry to the military alliance.

“We condemn in the strongest possible terms the vile attack on our holy book … Permitting this anti-Islam act, which targets Muslims and insults our sacred values, under the guise of freedom of expression is completely unacceptable,” the Turkish Foreign Ministry said.

Its statement was issued after an anti-immigrant politician from the far-right fringe burned a copy of the Koran near the Turkish Embassy. The Turkish ministry urged Sweden to take necessary actions against the perpetrators and invited all countries to take concrete steps against Islamophobia.

A separate protest took place in the city supporting Kurds and against Sweden’s bid to join NATO. A group of pro-Turkish demonstrators also held a rally outside the embassy. All three events had police permits.

A spokesperson at Sweden’s Foreign Ministry said they could not immediately comment.

The Koran-burning was carried out by Rasmus Paludan, leader of Danish far-right political party Hard Line. Paludan, who also has Swedish citizenship, has held a number of demonstrations in the past where he has burned the Koran.

Paludan could not immediately be reached by email for a comment. In the permit he obtained from police, it says his protest was held against Islam and what it called Turkish President Tayyip Erdogan’s attempt to influence freedom of expression in Sweden.

Sweden and Finland applied last year to join NATO following Russia’s invasion of Ukraine but all 30 member states must approve their bids. Turkey has said Sweden in particular must first take a clearer stance against what it sees as terrorists, mainly Kurdish militants and a group it blames for a 2016 coup attempt.

At the demonstration to protest Sweden’s NATO bid and to show support for Kurds, speakers stood in front of a large red banner reading “We are all PKK”, referring to the Kurdistan Workers Party that is outlawed in Turkey, Sweden, and the United States among other countries, and addressed several hundred pro-Kurdish and left-wing supporters.

“We will continue our opposition to the Swedish NATO application,” Thomas Pettersson, spokesperson for Alliance Against NATO and one of organizers of the demonstration, told Reuters.

Police said the situation was calm at all three demonstrations.

Earlier on Saturday, Turkey said that due to lack of measures to restrict protests, it had cancelled a planned visit to Ankara by the Swedish defence minister.

“At this point, the visit of Swedish Defense Minister Pal Jonson to Turkey on January 27 has become meaningless. So we cancelled the visit,” Defence Minister Hulusi Akar said.

Jonson said separately that he and Akar had met on Friday during a gathering of Western allies in Germany and had decided to postpone the planned meeting.

Akar said he had discussed with Erdogan the lack of measures to restrict protests in Sweden against Turkey and had conveyed Ankara’s reaction to Jonson on the sidelines of a meeting of the Ukraine Defence Contact Group.

“It is unacceptable not to make a move or react to these (protests). The necessary things needed to be done, measures should have been taken,” Akar said, according to a statement by Turkish Defence Ministry.

Finland and Sweden signed a three-way agreement with Turkey in 2022 aimed at overcoming Ankara’s objections to their membership of NATO. Sweden says it has fulfilled its part of the memorandum but Turkey is demanding more, including extradition of 130 people it deems to be terrorists. 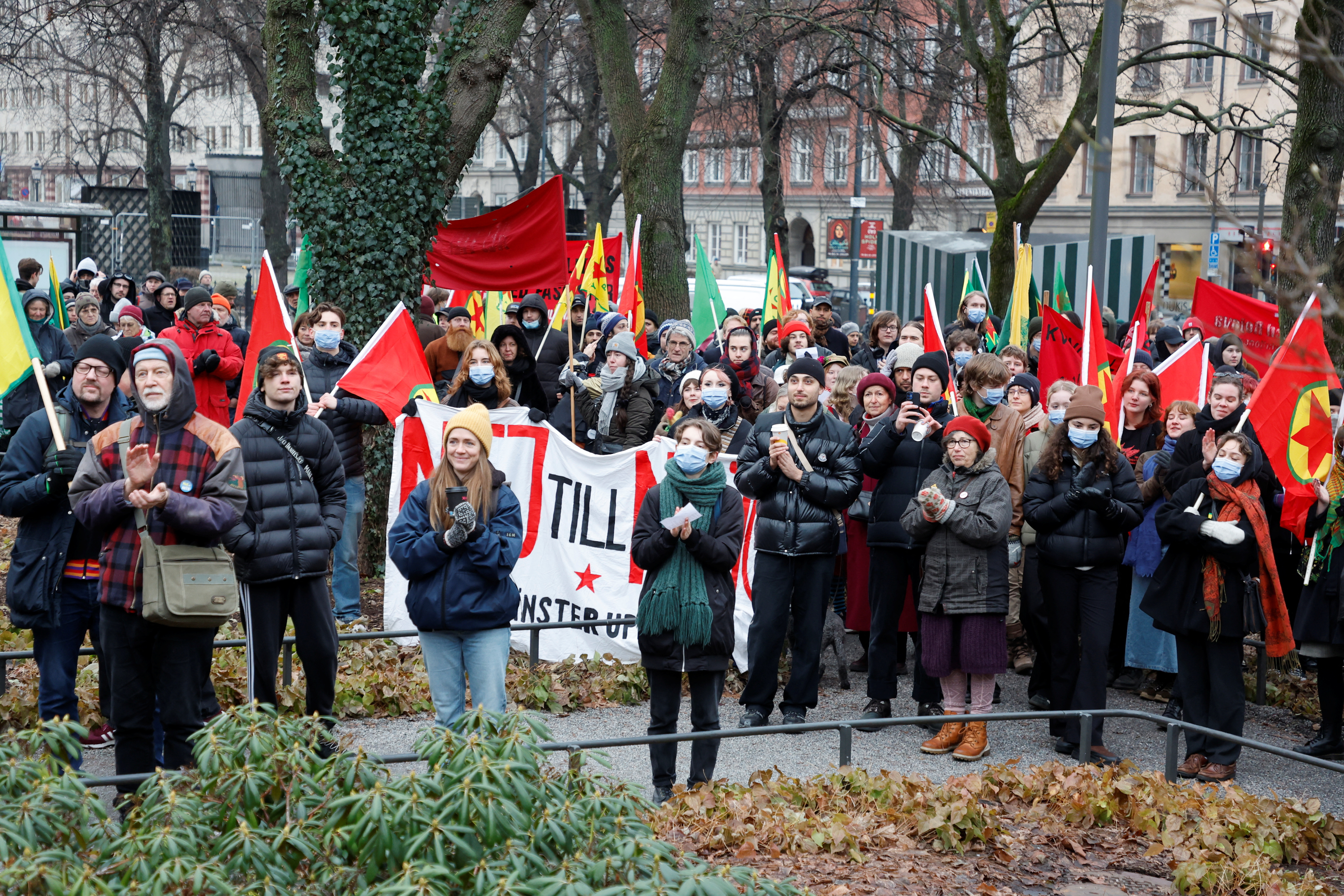 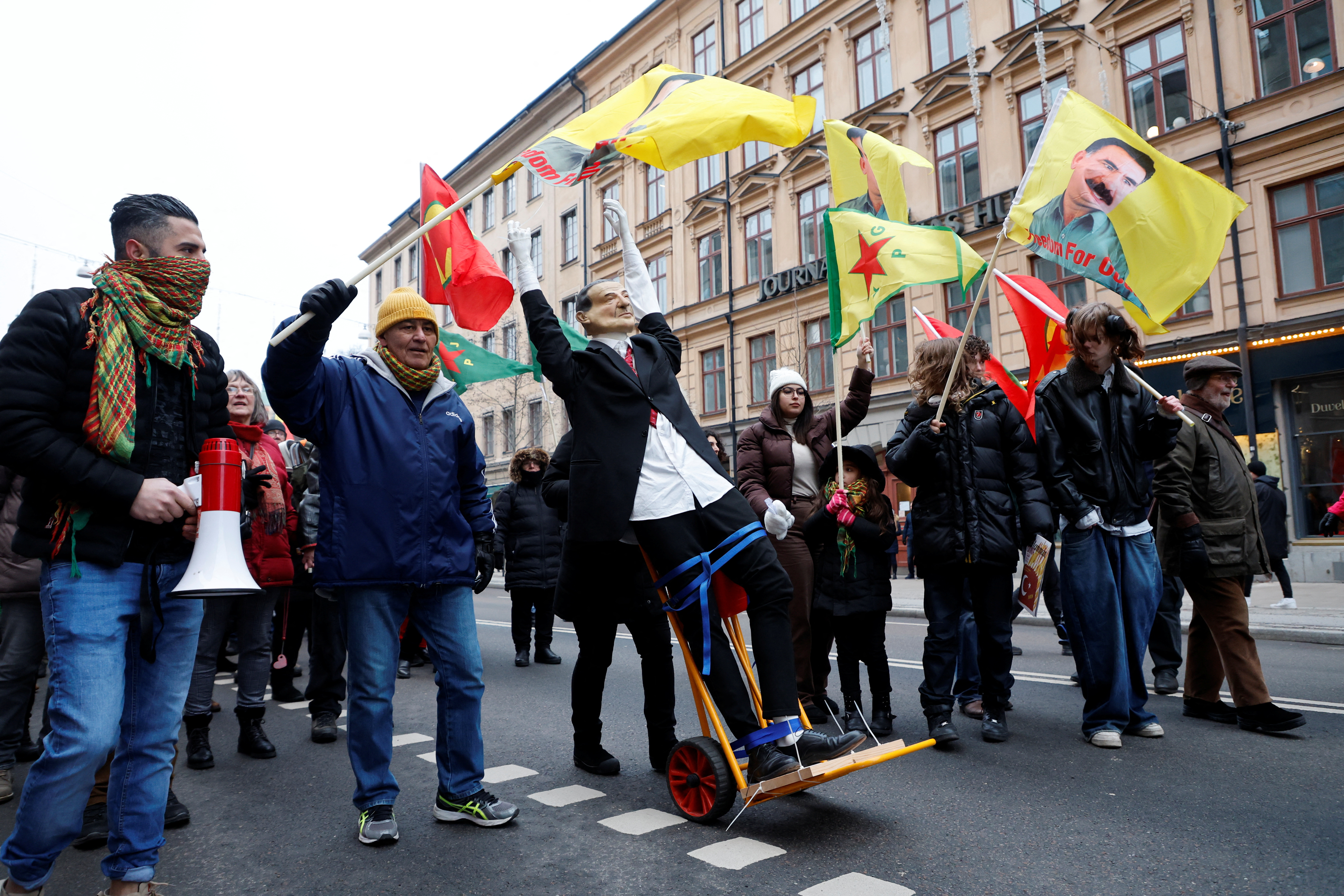 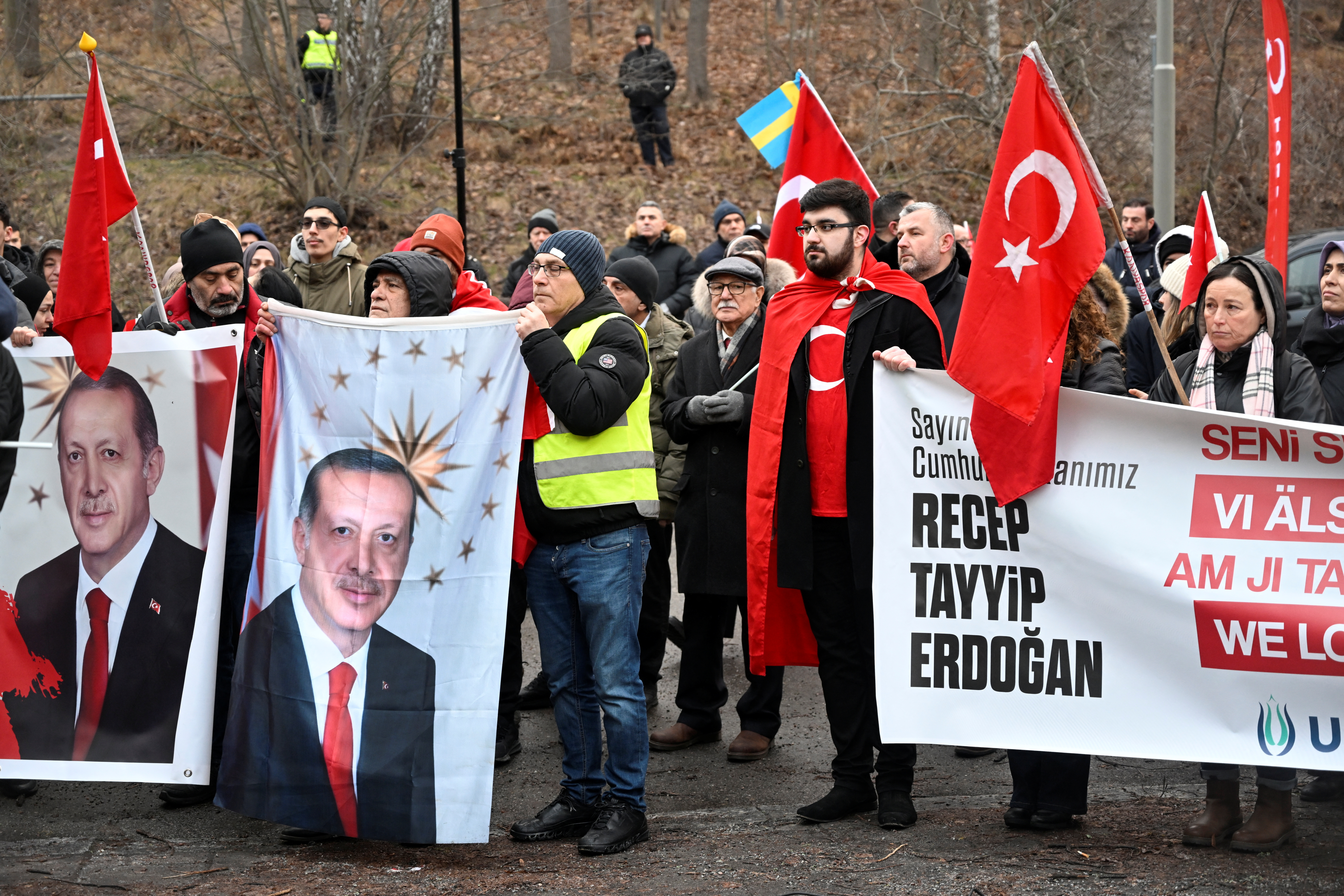 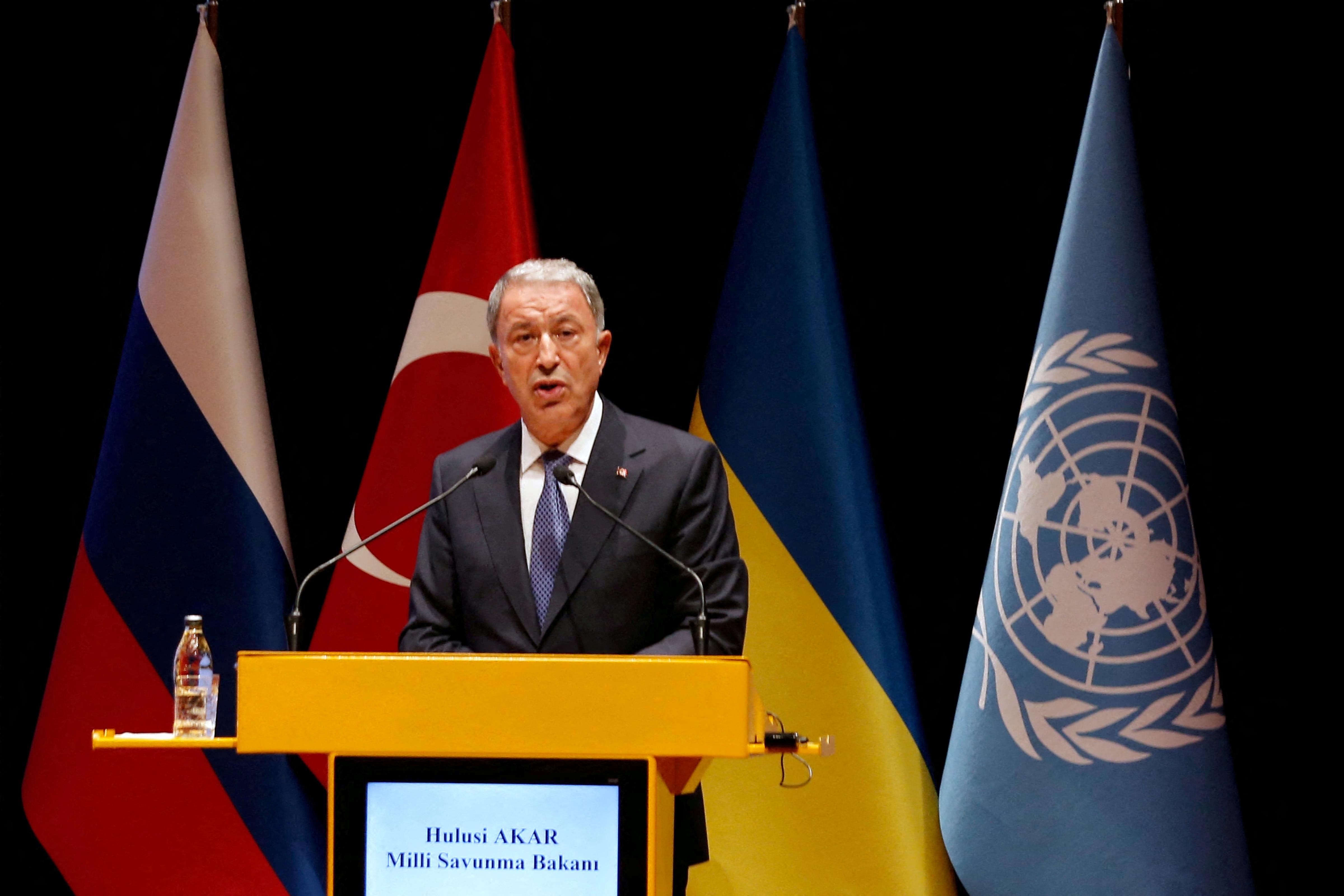 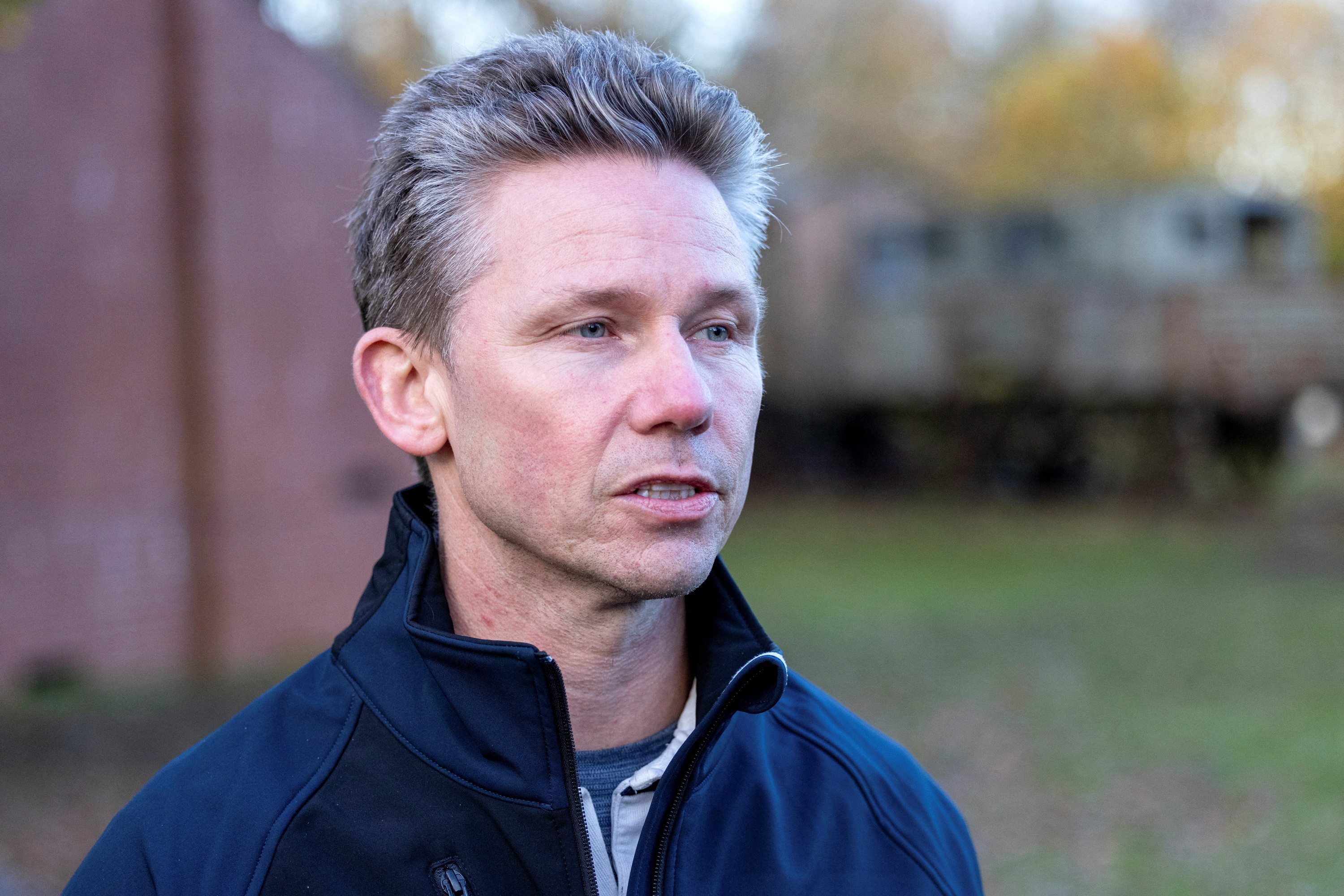 Swedish Defence Minister Pal Jonson looks on, as he visits soldiers from the Armed Forces of Ukraine who are taking part in the UK-led basic training programme, on a military training camp, in an unspecified location in the North East of England, Britain, November 9, 2022. Andy Commins/Pool via REUTERS 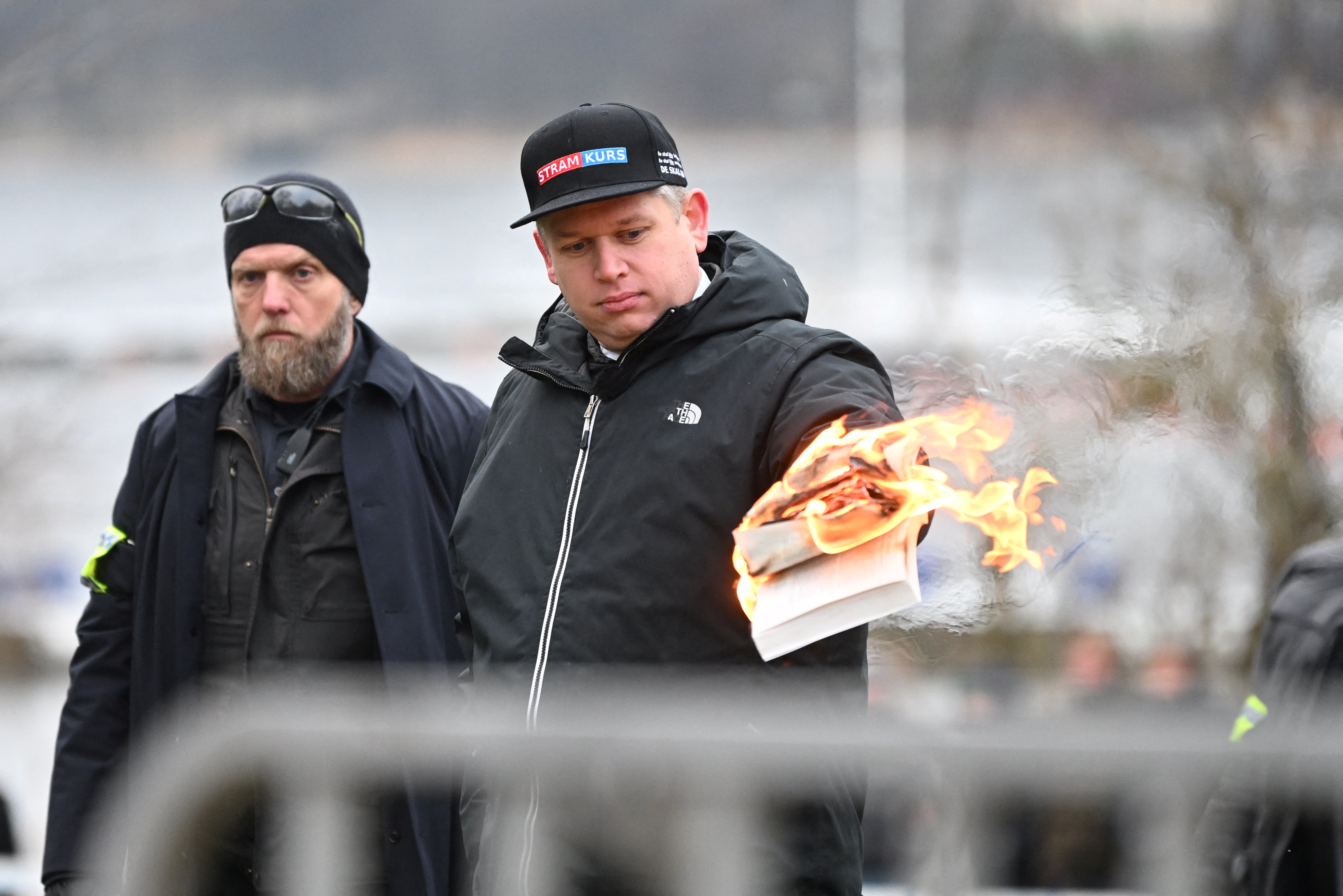 Leader of the far-right Danish political party Stram Kurs Rasmus Paludan burns a copy of the Koran during a manifestation outside the Turkish embassy in Stockholm, Sweden, January 21, 2023. Fredrik Sandberg/TT News Agency/via REUTERS 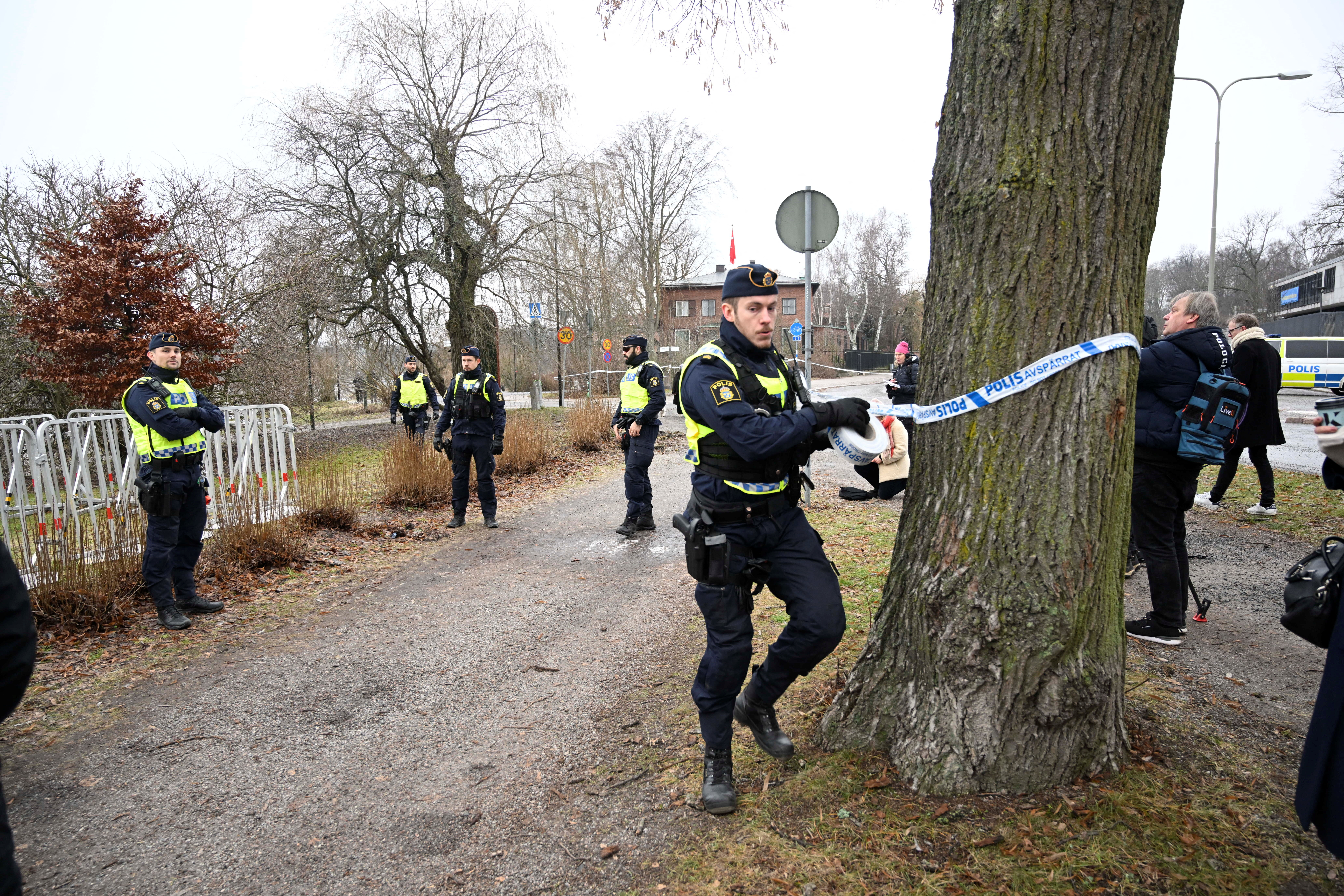 Police cordon off the area where leader of the far-right Danish political party Stram Kurs Rasmus Paludan has planned to hold a meeting outside the Turkish embassy in Stockholm, Sweden, January 21, 2023. Fredrik Sandberg/TT News Agency/via REUTERS