SEOUL (Reuters) – Debate is brewing in South Korea over efforts to scrap a decades-old ban on North Korean media, as changing attitudes fuel renewed calls to review a national security law dating from the Cold War. 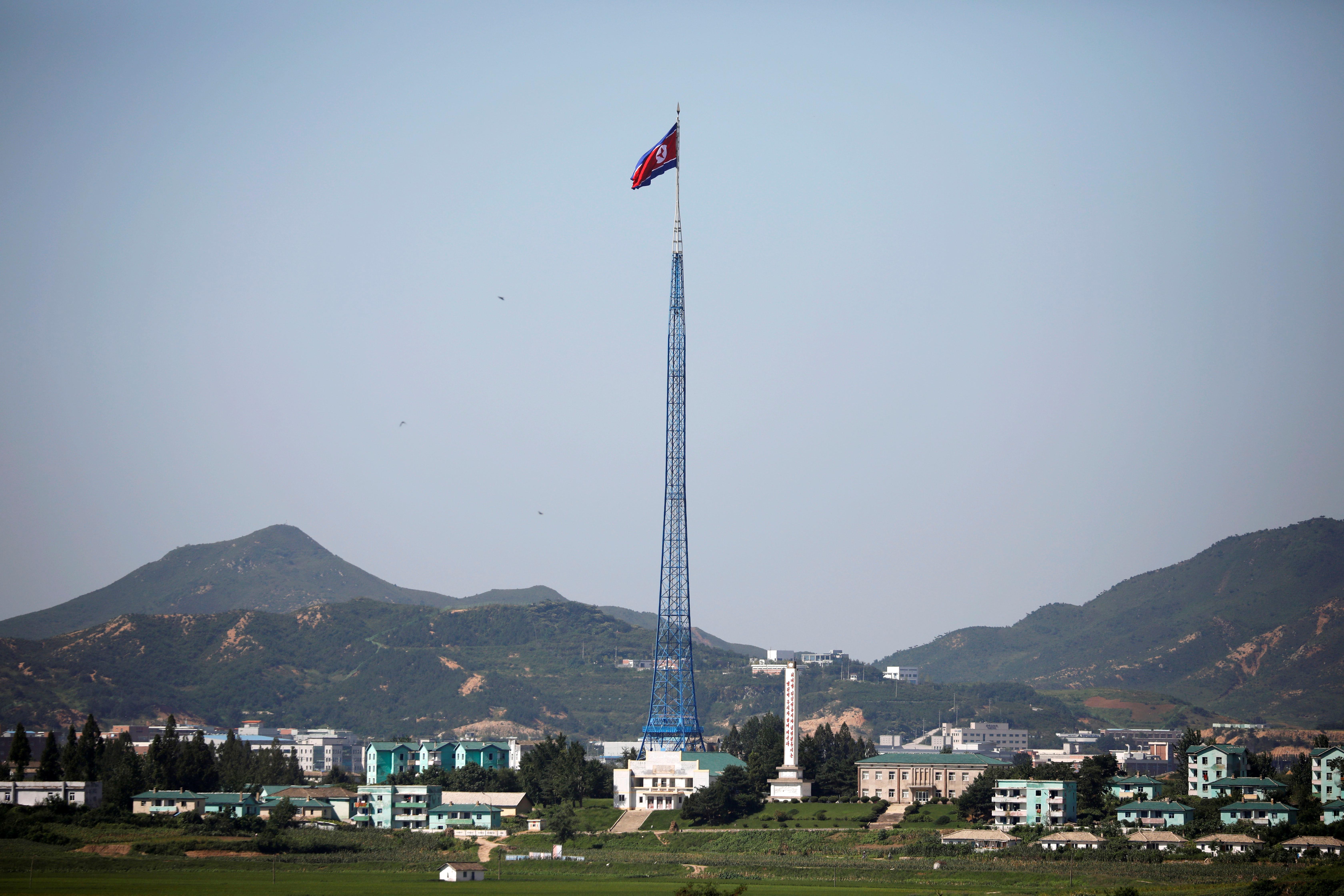 FILE PHOTO: A North Korean flag flutters on top of a tower at the propaganda village of Gijungdong in North Korea, in this picture taken near the truce village of Panmunjom, South Korea, August 26, 2017. REUTERS/Kim Hong-Ji

The neighbours are still technically at war since an armistice put an end to fighting in the 1950-1953 Korean War, rather than a peace treaty.

“Article 7 forces people to harbour hostility toward the North as it suppresses anyone’s freedom to review North Korean materials,” said Jang Kyung-wook of Minbyun, a collective of human rights lawyers, referring to a key provision of the law.

Jang has defended some of those charged under the law, adopted in 1948 to target communism and last revised in 1991, but which was used to jail thousands of activists and defectors and even execute some during the South’s military dictatorships.

Violations of the law can be punished with jail for up to seven years, although enforcement has eased recently.

However, more than 45% of South Koreans support scrapping Article 7, with about 40% opposed, a survey by pollster STI showed in April 2021, before the Constitutional Court began reviewing petitions against it this year.

In a report in July, the Unification Ministry, which is charged with handling ties with the North, told President Yoon Suk-yeol that gradually opening access to its media would foster mutual understanding on both sides.

The proposal has rekindled debate about whether South Korea, with its democratic system, economic dominance and cultural influence, driven by K-pop and global hits such as boy band BTS and the television show “Squid Game”, must still worry about North Korean propaganda.

Despite the relaxed approach to enforcement, many progressive activists say the authorities still use the law to pursue them, stoking security fears for political purposes.

Jung Dae-il, a missionary who studied the ideology of North Korean founder, Kim Il-sung at a Christian think tank, published his memoir in the South, was arrested this month on charges of breaching the law after police raided his home in July.

“They labelled me a commie in a Christian’s skin, raising issue with more than 10 years of my work,” Jung told a rally in Seoul, the capital, after his release on Nov. 9.

Data from prosecutors shows 41 people were indicted in 2021 from among 250 accused of violating the law, down from 2013’s corresponding figures of 197 indicted from among 289 accused.

Opaque terms used in Article 7, such as “praise” and “incitement”, had allowed arbitrary interpretations, the the Constitutional Court said before its first public hearing on the law in September.

This had allowed iron-fisted regimes to abuse the provisions to silence dissenters and political foes, it added.

In a statement to the court before the hearing, the national rights watchdog had called the clauses vague, disproportionate and damaging to fundamental rights.

Most activities banned by the law are no longer considered a “clear and present danger” to South Korea, the watchdog said, citing “insurmountable military and economic differences and people’s awareness of democracy”.

Still the justice ministry has protested against plans to revoke Article 7.

“Evil consequences from the spread of pro-enemy expressions can only be healed at the expense of massive national damage and division,” it said in a statement, adding that the issue could not be left to “the ideological free market”.

Also joining the debate are many scholars and journalists, who have gained access to the contentious material through virtual private networks or proxy servers, who say such a move would benefit people’s right to know.

North Korean films, songs and other content are already widely available on YouTube and elsewhere, they added.

Opponents said Pyongyang’s propaganda machine could nurture more pro-North forces in the South, where a partisan divide is growing as a standoff over the North’s development of nuclear weapons stretches out.