“Mommy and I are taking a ballroom-dancing class,” my father announced to me over the phone.

“Are you serious?” I asked. I was living in Iowa at the time, in graduate school.

“Yes,” he said. “And I am so bad! The teacher danced with Mommy most of the time because I got tired. I will try better next week.”

My mind was still trying to visualize his first statement: my parents dancing. Aside from the occasional family wedding reception, I’d never seen them dance, separately or together. Even then, they’d awkwardly sway in the cocooned safety of a crowd, and often ceded the dance floor to more graceful couples, like my aunt and uncle from Texas, who were regular weekend ballroom dancers.

Although my parents had firmly settled into retirement, and ballroom dancing was a popular leisure activity in their demographic and community in Orange County, Calif., it still felt like an odd fit for their personalities. To dance required qualities I couldn’t imagine in them: confidence, spontaneity, and an utter lack of regard for what other people thought of them.

Since arriving in America shortly before the end of the war in Vietnam, my parents had perfected their ability to linger in the margins of American suburban society. As part of the first wave of Vietnamese refugees, they learned the necessary skills to survive and assimilate. They studied English, they softened their accents, they acquired graduate degrees and respectable jobs. They got a mortgage, paid their taxes, and put two children through school so they could earn their own graduate degrees. They became U.S. citizens. Yet for decades, despite all their labor and accomplishments, my parents denied themselves the social privileges and amusements that other Americans around them engaged in for relaxation.

Read More: These Are the Victims of the Monterey Park Shooting

They did not volunteer for the neighborhood associations or PTA. They did not host or attend housewarming parties or summer barbecues or vacation with friends. And they certainly did not dance.

Why not? I imagine them counting all the reasons, pointing to the various dramas and crises in our family’s history. Our home was the entry point for many of our relatives immigrating to America, with aunts, uncles, and cousins arriving from Vietnam, and then leaving to resettle in other parts of the country. My father returned to medical school, though he ultimately never practiced medicine. Then there were the logistics of caring for my aging grandparents, followed by aunts, but strangely never uncles, falling sick themselves.

It wasn’t all stress. On the weekends, my parents relaxed in front of the television, watching Paris by Night, a Vietnamese variety show of lavish music and dance numbers, and old movies on VHS. My father especially loved MGM musicals, which he’d watched as a teenager back in Vietnam. Our favorites were Singing in the Rain and An American in Paris. We marveled at the choreography and spectacle. We agreed that while Fred Astaire and Ginger Rogers were superior technical dancers, Gene Kelly and Leslie Caron looked more romantic. They also had black hair, and if we squinted at the screen, we could imagine they were not so different from us.

When I was 6, my mother enrolled me in ballet classes, perhaps hoping to instill the confidence and grace she’d been denied. I danced for the next nine years, even though I had little flexibility and a poor turnout. When I turned 12, my mother signed me up for cotillion lessons hosted at a country club we didn’t belong to at the top of a hill. Every weekend, she carefully drove me up and down the winding roads so I could learn how to waltz and foxtrot.

I do not recall the steps of any of those dances. Instead, I remember how my mother sat in the corner of the ballroom, cleaning out her purse, waiting for my lesson to finish.

If my brother and I had ever bothered to ask my parents why they never did anything for themselves, they would have said they’d rather watch us have fun. And I believe that’s true. But what they’d never admit, what I can only see now, as a parent myself, is that they didn’t believe they deserved these opportunities. Not until they knew their children were grown and settled could they feel secure enough to finally do something for themselves.

It is what I imagine many senior Asian Americans in ballroom dance halls across this country must feel every time they dress up in their fanciest clothes and step on the dance floor, holding the hands of their loved ones. After decades of sacrificing for their families, they finally feel safe enough to indulge in a small pleasure of their own. To dance with grace is to move without burden or responsibility. It is to feel light and free from pain or fear or guilt.

As details of the Monterey Park tragedy continue to emerge, that the shootings occurred at a dance hall, primarily filled with older Asian Americans gathering to celebrate the Lunar New Year, perhaps for the first time since the pandemic, I immediately thought of my parents, my relatives, and countless others who considered these places a respite from the sorrows and frustrations of the real world. I hope that the hateful act of one person will not discourage them from returning, from continuing to seek joy and create happier memories, and I believe it won’t. Given all they’ve been through in their lives, they are too resilient. They’ve survived loss and suffering before, and they will again.

I wish I could say my parents took classes and danced for years, enjoying a retirement they’d so richly deserved and earned. Instead, a few months after they started, my father began showing symptoms of Alzheimer’s, and the classes drifted away, my parents moving on to the next stage of their lives together. 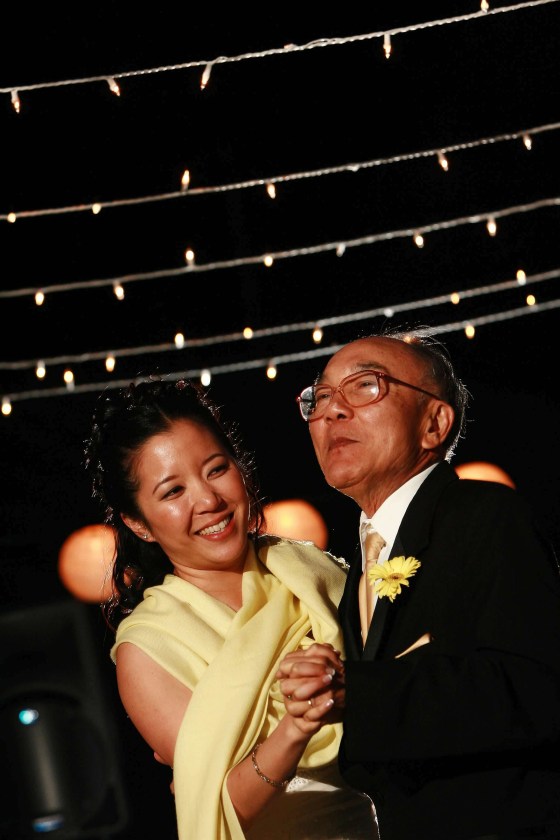 Craig MitchelldyerThe author and her father, dancing together at Phan’s wedding in 2006.

My father and I danced together only a few times, at my brother’s wedding, and six months later, at mine. There were no fancy moves or dips or swings, only swaying, my father remarking with wonder how he felt both sadness and joy in his heart that evening.